The move targeting Justice Minister Abdulhamit Gul and Interior Minister Suleyman Soylu further ratcheted up tensions between the Nato allies, and comes after President Recep Tayyip Erdogan insisted his government would not give in to Washington's threats.

Andrew Brunson, who led a Protestant church in the Aegean city of Izmir, was placed under house arrest last week after nearly two years in jail on charges of espionage and supporting terror groups. He faces up to 35 years in jail if convicted.

"We've seen no evidence that Pastor Brunson has done anything wrong, and we believe he's a victim of unfair and unjust attention by the government of Turkey," White House spokeswoman Sarah Sanders told journalists.

"At the president's direction, the Department of the Treasury is sanctioning Turkey's minister of justice and minister of interior, both of whom played leading roles in the arrest and detention of Pastor Brunson."

The sanctions freeze any property or assets on US soil held by the two ministers, and bar US citizens from doing business with them.

US Secretary of State Mike Pompeo spoke Wednesday with his Turkish counterpart Mevlut Cavusoglu, and has plans to meet him next week to demand Brunson's freedom, the State Department said.

"Turkey knows our position well: Pastor Brunson must be released from house arrest and brought back home," Pompeo's spokeswoman Heather Nauert told reporters travelling with him.

"This has gone on far too long." Pompeo, who is heading to Singapore to meet with South-east Asian foreign ministers, said Trump had deemed sanctioning the Turkish officials "the appropriate action." .

Brunson was initially detained in October 2016 during Turkey's crackdown following an attempted putsch.

He stands accused of carrying out activities on behalf of two organisations Turkey considers terror groups. 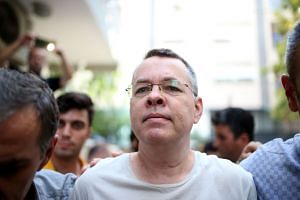 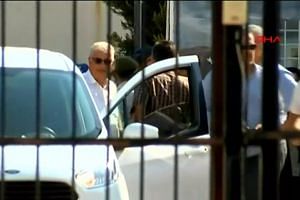 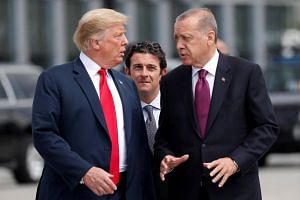 Erdogan warns US over sanctions threat

One is led by the US-based Muslim preacher Fethullah Gulen, who Ankara says was behind a 2016 failed coup, while the other is the Kurdistan Workers' Party (PKK).

The pastor denies the charges and his defence team argues the case is built on questionable witness statements. His next hearing is set for Oct 12.

Vice-President Mike Pence, who like Brunson is an evangelical Christian, has declared Brunson "a victim of religious persecution."

But Erdogan has dismissed the claim, saying Turkey did not have the "slightest problem against religious minorities."

On Wednesday, Erdogan accused the United States of having an "evangelist, Zionist mentality" and using "threat-filled languages."

Brunson is one of tens of thousands of people - and several Americans - detained on similar charges during the state of emergency declared by Erdogan in the wake of the 2016 failed coup bid.

The spat over the pastor has stoked tensions between the two governments already quarrelling over Washington's support of a Syrian Kurdish militia.

Turkey is also angry at the United States for its refusal to extradite Gulen, who lives in exile in rural Pennsylvania. Gulen vehemently denies that he masterminded the failed 2016 coup bid.

Ankara meanwhile upset Washington by imprisoning two Turkish employees of American consulates in the country and holding another under house arrest on terror-related charges, which the US has strongly rejected.

The imposition of sanctions on Wednesday is sure to fuel the fire.

"President Trump has made it abundantly clear that the United States expects Turkey to release him immediately."

Washington accused the two ministers of leading government organisations behind "serious human rights abuses." The Turkish lira fell to 5.0 against the dollar after the sanctions announcement.