CANONSBURG, PENNSYLVANIA (REUTERS) - Republicans are scrambling to avoid a political embarrassment in a conservative district of Pennsylvania, where a pro-gun, pro-union Democrat could be about to win a congressional election in one of President Donald Trump's white, working-class strongholds.

Democrat Conor Lamb, a 33-year-old Marine veteran and former federal prosecutor, is in a dead heat with Republican state Representative Rick Saccone in Tuesday's special election for an open seat in the US House of Representatives that Republicans have held since 2003.

The race is seen as a referendum on Trump and a harbinger for November's congressional elections, according to pollsters and party insiders who say the moderate Democrat could emerge as a model for Democratic candidates in other competitive House districts that Trump carried in 2016.

"The Democrats have nominated the ideal candidate, because he fits the profile of the electorate. If they'd nominated a liberal who allowed the campaign to become nationalised, it would be over by now," said G. Terry Madonna, director of the Franklin and Marshall College Poll in Lancaster, Pennsylvania.

"If he wins, or even if he just comes close, he is a model for Democrats in competitive Trump districts nationally."

Trump won the district, in southwest Pennsylvania, by nearly 20 points in 2016 and has endorsed Saccone.

"The Economy is raging, at an all time high, and is set to get even better. Jobs and wages up. Vote for Rick Saccone and keep it going!" the president tweeted on Tuesday.

Still, Lamb has fought to make the contest a local referendum and said he was focused on issues in his district even as he welcomed Democratic enthusiasm over the race.

"This is a local race," Lamb told reporters after voting at a church in his hometown of Mt. Lebanon shortly after sunrise on Tuesday. "I don't think it has anything to do with the president." Polls closed at 8pm (0000 GMT). 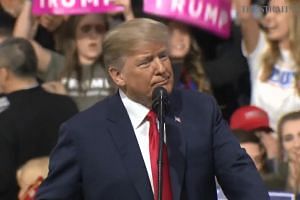 Republican dominance has been so strong in the district that Democrats ran no candidates in the previous two US House elections, even though state voter registration records show Democrats outnumbering Republicans.

But dynamics have changed in the district, which runs from wealthy suburbs south of Pittsburgh through hardscrabble steel and coal mining towns to farmlands along the West Virginia border.

Saccone, 60, a conservative who has described himself as"Trump before Trump was Trump," led the race by more than 10 percentage points in January. The contest has since narrowed to a toss-up on a wave of Democratic voter enthusiasm for Lamb.

Republicans have also found it harder than expected to mount effective attacks on Lamb's positions on abortion, guns and the national Democratic Party.

He has eschewed the national Democratic brand, saying he would not support House Democratic leader Nancy Pelosi as speaker.

Lamb says he personally opposes abortion but accepts the Supreme Court's 1973 Roe vs. Wade landmark decision allowing abortion as the law of the land.