WASHINGTON • A group of 11 Republican senators broke ranks with their leadership and the administration to side with Democrats in a showdown over sanctions on Russia, underscoring the political sensitivity of the issue amid questions about President Donald Trump's relationship with Moscow.

The Republicans voted with Democrats seeking to keep sanctions in place on companies controlled by an influential Russian oligarch with connections to Russian President Vladimir Putin.

The move by the 11 Republicans on Tuesday allowed Senate Democrats to advance a measure that would reverse a decision last month by the Treasury Department to lift sanctions that it imposed last year on companies controlled by Mr Oleg Deripaska, including the aluminium giant Rusal.

The Treasury Department's decision would leave in place personal sanctions on Mr Deripaska and require him to give up control over Rusal and two linked companies, EN+ and JSC EuroSibEnergo.

But the vote was a symbolic crack in the Republican Party, and came despite opposition from majority leader Mitch McConnell, and a last-ditch plea by Treasury Secretary Steven Mnuchin.

The vote in some ways forced Republicans to choose between the party's traditional foreign policy, which has long supported a tougher line on Russia, and Mr Trump, whose warmer stance towards Russia has inflamed questions about Moscow's efforts in 2016 to help elect him.

The Treasury Department last April announced the sanctions on Mr Deripaska, his companies and those of other Russian oligarchs in retaliation for Russian meddling in the US presidential election.

The announcement was touted as evidence that the administration was taking a tough stance against Moscow despite Mr Trump's equivocation on Russian interference and his warm words for Mr Putin.

But the Treasury Department repeatedly delayed the full implementation of the sanctions against the three Deripaska companies amid an aggressive lobbying and legal campaign in Washington by the companies and their allies.

They argued that the sanctions could have unintended negative effects on companies in the United States, Europe, Jamaica, Guinea and elsewhere by disrupting the supply of aluminium.

The Treasury Department echoed those concerns in announcing last month that it would lift the sanctions against the three Deripaska companies as part of an agreement that it said would reduce Mr Deripaska's ownership and control of the companies. 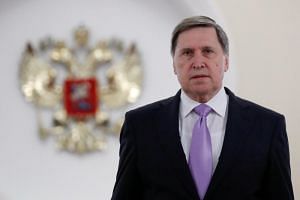 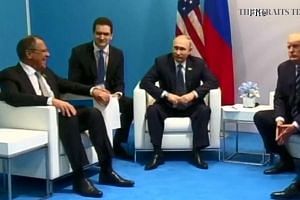 Trump under fresh scrutiny over relationship with Putin

Trump concealed details of meetings with Putin: US officials

The move prompted howls of protest from Democrats and some Russia hawks, who accused the administration of going soft on Russia amid special counsel Robert Mueller's probe into whether the Trump campaign coordinated with Russia's election meddling.

Mr Deripaska has emerged as a bit character in the storylines around the investigation as a result of his payments to Paul Manafort, Mr Trump's former campaign chairman, who has been convicted and pleaded guilty to charges brought by Mr Mueller.

Democrats have urged the Treasury Department to postpone the final decision on sanctions relief for Mr Deripaska's companies until after Mr Mueller has concluded his investigation.

Mr Mnuchin visited Republican senators on Tuesday before the vote to implore them to support the sanctions relief.

The appearance followed a briefing to the House last week in which he argued that the deal his agency negotiated with Mr Deripaska's firms would punish the oligarch by separating him from the companies, without having economic ripple effects. The briefing left Democratic leaders unconvinced.

And Tuesday's Senate vote indicated that Mr Mnuchin's assurances did not assuage doubts among the party's Russia sceptics that the deal with Mr Deripaska's companies sufficiently decreased his control.

"I don't like the way it's structured," said Republican Senator Marco Rubio, who voted with Democrats and has been among the party's leading critics of Russia.

The measure passed 57-42, with Senator Kirsten Gillibrand (Democrat) missing the vote as she announced her first step to start a campaign for the party's 2020 presidential nomination.

The measure was to face another Senate vote - this one requiring 60 votes - as soon as yesterday.

Democrat Senator Chuck Schumer, the minority leader, who introduced the resolution, foreshadowed the way his party intended to frame the fight if it does not get its way.

"We're only a few Republican votes short of the US Senate telling Putin he can't run the show no matter what President Trump and his administration try to do," Mr Schumer said on Tuesday. "If Republican senators agree with Leader McConnell, who said that Putin is a 'thug', they'll vote yes tomorrow."