WASHINGTON/TEHERAN • The United States has reimposed a wave of tough, unilateral sanctions against Iran, bringing back into effect harsh penalties that had been lifted under a historic, multi-party nuclear agreement that President Donald Trump abandoned in May.

The first of two rounds of American sanctions kicked in yesterday, targeting Iran's access to US banknotes and key industries, including cars and carpets.

Iranians are already seeing the effects of the sanctions, with the rial currency losing around half its value since Mr Trump announced the US withdrawal from the 2015 nuclear accord. Mr Trump's contempt for the nuclear deal dates back to his time as presidential candidate and on May 8, he made good on a pledge to pull the US out of the pact.

He blasted the agreement yet again on Monday, calling it a "horrible, one-sided deal (that) failed to achieve the fundamental objective of blocking all paths to an Iranian nuclear bomb".

The unilateral withdrawal came despite other parties to the agreement - Britain, China, France, Germany and Russia - as well as the European Union pleading with Mr Trump not to abandon the pact aimed at blocking Iran from acquiring a nuclear weapon.

In a statement on Monday just hours before the sanctions went back into force, Mr Trump said: "I remain open to reaching a more comprehensive deal that addresses the full range of the regime's malign activities, including its ballistic missile programme and its support for terrorism."

If you're an enemy and you stab the other person with a knife, and then you say you want negotiations, then the first thing you have to do is remove the knife.

DEATH FOR THE WORKING CLASS

I feel like my life is being destroyed. The economic situation right now means that the working class must die. 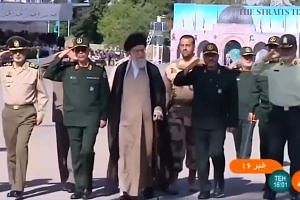 Iranians and their leaders brace for impact of new US sanctions

Iran braces for return of US sanctions; riot police on standby in unrest-hit town

"If you're an enemy and you stab the other person with a knife, and then you say you want negotiations, then the first thing you have to do is remove the knife," the Iranian leader said in an interview on state television.

"They want to launch psychological warfare against the Iranian nation," he added. "Negotiations with sanctions doesn't make sense."

"We are determined to protect European economic operators engaged in legitimate business with Iran," she said in a statement.

Iran's new central banker, Dr Abdolnaser Hemmati, on Sunday spoke of "economic warfare" by the US, but also said in an interview on state TV that Iran was "powerful".

In an attempt to ease economic hardship in the country, he announced that starting on Monday, Iranians would no longer be restricted in the amount of dollars and gold they could bring in. An earlier rule capped that amount at €10,000 ($15,800).

Dr Hemmati also announced that the government would subsidise medicine and food to ensure that essential goods could be bought.

Many Iranians blame their own government for the return of US sanctions, but they also fear it could be the "final nail in the coffin" for the floundering economy.

"I feel like my life is being destroyed. The economic situation right now means that the working class must die," said Mr Ali Paphi, a construction worker.

"Sanctions are already badly affecting people's lives. I can't afford to buy food, pay the rent... No one cares about workers," he added.

Ms Sogand, a young Iranian-American, came to live in Iran for the first time five years ago and had enjoyed the thaw in international tensions that accompanied the nuclear deal.

But in recent months, she grew worried about her status as a dual national - several have been arrested on espionage charges in Iran - and decided it was time to get out.

"The economic destabilisation and the unravelling of any and all financial prospects in this country was the nail in the coffin," she said.

The second phase of US sanctions will take effect on Nov 5 and will block Iran's oil and gas sales.

A version of this article appeared in the print edition of The Straits Times on August 08, 2018, with the headline 'US reimposes tough, unilateral sanctions against Iran'. Subscribe
Topics:
More
Whatsapp Linkedin FB Messenger Telegram Reddit WeChat Pinterest Print Copy permalink