LOS ANGELES (Bloomberg) - A rear admiral became the highest-ranking US Navy officer caught in an investigation of a Singapore-based contractor who plied commanders with cash, entertainment and prostitutes so they would steer ships to ports that were most lucrative to his business.

Robert Gilbeau pleaded guilty on Thursday (June 9) in San Diego federal court to lying to investigators. Gilbeau is a special assistant to the chief of the US Naval Supply Systems Command in Fort Belvoir, Virginia, according to his biography on the Navy website.

More than a dozen people, including Navy commanders and civilians, have been charged in what prosecutors have called a massive bribery and fraud scheme centred around Glenn Defense Marine Asia, which received hundreds of millions of dollars in contracts to provide fuel and other services to Navy vessels in Asian ports.

In March, a Navy captain was sentenced to 46 months in prison for his part in the scheme. 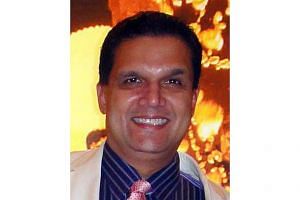 Leonard Glenn Francis, known in Navy circles as "Fat Leonard", was the chief executive officer of Glenn Defense Marine Asia Pte . The Malaysian businessman pleaded guilty in January 2015 and faces as long as 25 years in prison when he's sentenced later this year.

Under his plea agreement with the Justice Department, Francis and his company will forfeit US$35 million (S$47 million) and pay at least US$25 million in restitution for defrauding the Navy.

"Admiral Gilbeau lied when he told investigators that he 'always paid for half of the dinner' when he and Francis met about three times a year," according to a statement from US Attorney Laura Duffy in San Diego.

"When Gilbeau became aware that Francis and others had been arrested in connection with the fraud and bribery offences in September 2013, he destroyed documents and deleted computer files."

Glenn Defense Marine worked with the Navy for 25 years, providing goods and services for American ships in at least a dozen countries in Asia, according to court filings. Among three regional contracts the company was awarded in 2011 was one worth as much as US$125 million over five years to provide tugboats, fuel, trash removal and other services for the Navy in South-east Asia.