WASHINGTON/SEATTLE • US federal prosecutors are scrutinising the development of Boeing's 737 Max jetliners which have been involved in two fatal crashes since last October, a person briefed on the matter said.

The Justice Department is looking at the Federal Aviation Administration's (FAA) oversight of Boeing, the person said late on Monday. Separately, the Department of Transportation's inspector-general is also scrutinising the FAA's oversight of Boeing and the development of the 737 Max, according to a person with knowledge of the matter.

The Transportation Department's inspector-general's office conducts both audits and criminal investigations in conjunction with the Justice Department. The federal authorities had begun exploring a criminal investigation of how the 737 Max was certified to fly passengers before the crash in Ethiopia involving the new jet, according to sources.

The investigation was prompted by information obtained after a Lion Air 737 Max 8 crashed shortly after takeoff from Jakarta on Oct 29, said one person, who was not authorised to speak and asked not to be named.

The investigation has taken on new urgency after the March 10 crash of an Ethiopian Airlines 737 Max 8 near Addis Ababa that killed 157 people.

The Justice Department is in the process of gathering information about the development of the 737 Max, including through a grand jury subpoena, according to a person familiar with the matter. The grand jury's involvement was earlier reported by The Wall Street Journal.

Meanwhile, a Seattle Times investigation published on Sunday found that US regulators delegated much of the plane's safety assessment to Boeing and that Boeing in turn delivered an analysis with crucial flaws. 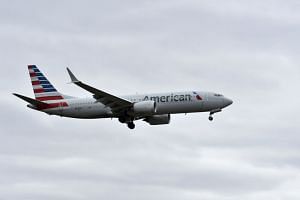 FAA employees had warned seven years ago that Boeing had too much sway over safety approvals of new aircraft, prompting an investigation by Transportation Department auditors who confirmed the agency had not done enough to "hold Boeing accountable".

While their concerns pre-dated the 737 Max development, in recent years, the FAA has shifted more authority over the approval of new aircraft to the manufacturer itself, even allowing Boeing to choose many of the personnel who oversee tests and vouch for safety.

At least a portion of the flight control software suspected in the 737 Max crashes was certified by one or more Boeing employees who worked in the outsourcing arrangement, said one person familiar with the work who was not authorised to speak about the matter.

In Canada, the authorities are re-examining the certification given to the 737 Max, Reuters reported, citing Transport Minister Marc Garneau. Canada had earlier accepted FAA's certification of the plane, under a deal where both countries accept each other's approvals.

Boeing CEO Dennis Muilenburg on Monday said the company will soon release a software update for the plane and related pilot training to address concerns that emerged about its software after the Lion Air tragedy. He said Boeing understands "lives depend on the work we do", and was taking steps to "fully ensure" the 737 Max safety in the wake of the deadly crashes.