WASHINGTON (REUTERS) - Chinese telecoms giant Huawei Technologies' chief financial officer was arrested as part of a US investigation of an alleged scheme to use the global banking system to evade US sanctions against Iran, according to people familiar with the probe.

The United States had been looking since at least 2016 into whether Huawei Technologies violated US sanctions against Iran, Reuters reported in April.

More recently, the probe included the company's use of HSBC Holdings to make illegal transactions involving Iran, the people said.

Huawei CFO Meng Wanzhou, daughter of the company's founder, Mr Ren Zhengfei, was arrested in Canada and faces extradition to the US. The news roiled global stock markets on fears the move could escalate the Sino-US trade dispute.

In 2012, HSBC paid US$1.92 billion (S$2.63 billion) and entered a deferred prosecution agreement with the US Attorney's office in Brooklyn for violating US sanctions and money laundering laws.

An HSBC spokesman declined to comment on Thursday (Dec 6). HSBC is not under investigation, according to a person familiar with the matter.

After news of the arrest, Huawei said it has been provided little information of the charges against Ms Meng, adding that it was "not aware of any wrongdoing by Ms Meng".

A spokesman for the US Attorney's office in Brooklyn, which Reuters has reported is investigating Huawei, declined to comment.

Stock markets around the world tumbled on Thursday on fears actions against Huawei could derail talks to resolve the trade dispute between the world's top two economic powers, whose tariffs have disrupted the flow of hundreds of billions of dollars' worth of goods.

HSBC's US-listed shares initially fell as trading volume rose, dropping as much as 6 per cent after Reuters reported the bank's link to the case. They were subsequently down 4.6 per cent.

Huawei is already under intense scrutiny from Washington and other western governments over its ties to the Chinese government, driven by concerns it could be used by Beijing for spying.

It has been locked out of US and some other markets for telecom gear, but has repeatedly insisted Beijing has no influence over it.

Ms Meng, one of the vice-chairs on the company's board, was arrested last Saturday at the request of US authorities and a court hearing has been set for Friday, a Canadian Justice Department spokesman said.

US President Donald Trump and Chinese President Xi Jinping had dined in Buenos Aires last Saturday at the G-20 summit.

Canadian Prime Minister Justin Trudeau on Thursday said his government had no involvement in the arrest of Ms Meng, who was detained while changing planes at Vancouver airport.

Mr Trudeau told reporters that Ottawa had been given a few days' advance notice about the planned arrest, but declined to give further details, citing an upcoming bail hearing.

Mr Trump's national security adviser, Mr John Bolton, said in an interview with National Public Radio that he knew in advance about the arrest, but a White House official said Mr Trump did not know about the Huawei extradition request before his dinner with Mr Xi in Argentina.

Huawei, which generated US$93 billion in revenue last year, confirmed the arrest. 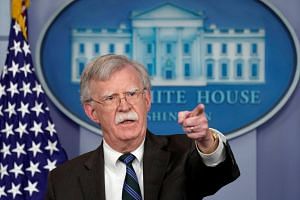 "The company has been provided very little information regarding the charges and is not aware of any wrongdoing by Ms Meng," it said in a statement.

Chinese Foreign Ministry spokesman Geng Shuang told a daily briefing on Thursday that China had asked Canada and the United States for an explanation of Ms Meng's arrest, but they have "not provided any clarification".

The Chinese consulate in Vancouver has been providing her assistance, he added, declining further comment.

On Wednesday, China's embassy in Canada said it resolutely opposed the arrest and called for her immediate release.

The probe of Huawei is similar to one that threatened the survival of China's ZTE Corp, which pleaded guilty in 2017 to violating US laws that restrict the sale of American-made technology to Iran in efforts to curb Teheran's missile and nuclear programmes.

Earlier this year, the US said ZTE made false statements about disciplining some executives responsible for the violations, and banned US firms from selling parts and software to the company.

After ceasing major operations as a result, ZTE paid another US$1 billion as part of a deal to get the ban lifted.

Huawei has said it complies with all applicable export control and sanctions laws and other regulations.

News of the arrest came the same day Britain's BT Group said it was removing Huawei's equipment from the core of its existing 3G and 4G mobile operations and would not use the Chinese company in central parts of the next network.