NEW YORK (AFP) - Democratic presidential nominee Hillary Clinton has been suffering from pneumonia and "became overheated and dehydrated" during a 9/11 remembrance ceremony in New York on Sunday, but is "recovering nicely", her doctor said.

Physician Lisa Bardack examined the 68-year-old Clinton at her home in Chappaqua, New York, after she was forced to leave the ceremony at Ground Zero, a campaign aide said.

Video footage showed the candidate stumble as she was helped into her vehicle, and she needed to be held up on both sides by members of her entourage.

"Secretary Clinton has been experiencing a cough related to allergies. On Friday, during follow-up evaluation of her prolonged cough, she was diagnosed with pneumonia," Bardack said in a statement released by Clinton's campaign.

"She was put on antibiotics, and advised to rest and modify her schedule. While at this morning's event, she became overheated and dehydrated. I have just examined her and she is now re-hydrated and recovering nicely."

The diagnosis deals another headache to Clinton's presidential campaign , which was already scrambling to recover from her gaffe about Donald Trump's supporters.

The former secretary of state was at the ceremony at Ground Zero in Manhattan for 90 minutes and greeted some family members of those killed in the deadly terror strikes 15 years ago, her campaign said in a statement. 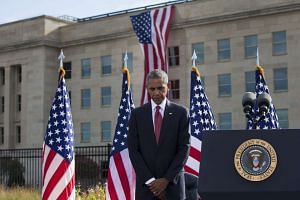 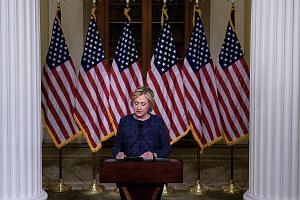 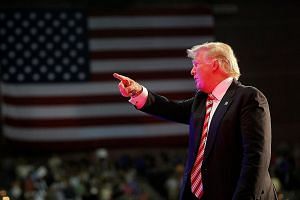 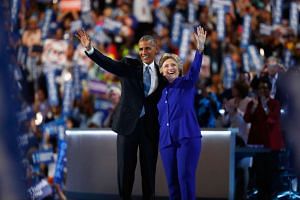 Obama to intensify push to get Clinton into White House

"During the ceremony, she felt overheated so departed to go to her daughter's apartment, and is feeling much better," the statement said.

A journalist at the ceremony saw Clinton, dressed in a navy suit, leave the event but noted that she was greeting people as she left and did not appear to be rushing out. She walked out accompanied by an aide at her elbow.

CNN later broadcast video of her appearing to almost faint s she tried to enter an SUV and being helped by her secret service guards.

A few hours later, she smiled for the media and posed for pictures with a young girl as she walked out of her daughter Chelsea's home into a waiting vehicle.

The episode was sure to fuel critics' claims that Clinton, 68, has serious health problems.

Just last week, she coughed her way through portions of a speech in Cleveland, her voice reduced to a crackling whisper at times.

The former first lady has dismissed "conspiracy theories" about her health, saying the coughing was brought on by seasonal allergies and pointing to a detailed report from her doctor declaring her fit to serve as president.

Clinton's illness came as she sought to move on after a blunder in which she called "half" of Donald Trump supporters "deplorable", a remark that came with just over two weeks to go until the first debate in the bitter battle for the White House.

"To be grossly generalistic, you could put half of Trump's supporters into what I call the basket of deplorables," Clinton told the crowd at the "LGBT for Hillary" gala.

"The racist, sexist, homophobic, xenophobic, Islamophobic - you name it. And unfortunately there are people like that." She added that those people are "irredeemable, but thankfully they are not America."

Trump slammed the remarks as "INSULTING," "disgraceful," a "grotesque attack on American voters," and "the worst mistake of the political season."

Trump's running mate Mike Pence, rhetorically addressing Clinton, said that these people "are Americans, and they deserve your respect".

Clinton admitted in a statement that her remarks had been "grossly generalistic" - as she said at the time.

Clinton then listed a number of "deplorable" things about Trump, which include a campaign based "largely on prejudice and paranoia," attacking "a federal judge for his 'Mexican heritage,'" and bullying the family of a slain army soldier "because of their Muslim faith."

Clinton said: "I won't stop calling out bigotry and racist rhetoric in this campaign."

"The odd turn of phrase is memorable and will continue to be used against her. The big mistake was using 'half,' and she's walked that back. But it isn't so easy to disengage because it is all on video."

Sabato noted, however, that Trump is not in a strong position to capitalise on Clinton's misstep.

"Donald Trump has a much longer list of insults to groups and individuals. Clinton can defuse her error by citing all of Trump's transgressions," he said.

Trump on Saturday compared Clinton's remarks to Republican Mitt Romney's 2012 presidential campaign gaffe, when he was caught saying that 47 per cent of the people would vote for Barack Obama's re-election because they are "dependent upon government", and "believe that they are victims".

"Hillary Clinton just had her 47% moment," Trump tweeted. "What a terrible thing she said about so many great Americans!"

Romney's remarks likely hurt him with independent voters, but it's unclear if Clinton's 'deplorable' gaffe will have such an impact.

A Washington Post-ABC News poll out Sunday - conducted in the days before she made the remark - shows that 70 per cent of the electorate has already decided who to vote for, and only 30 per cent are undecided or could switch.

Clinton leads Trump 46 per cent to 41 per cent lead among likely voters, according to the poll, which had a 4.5 percentage-point margin of error.