By postponing decisions on economic policy, Trump gets chance with Xi this week to focus on North Korea threat

SHANGHAI • United States President Donald Trump appeared to follow through on his promises to get tough on trade with China, less than a week before he is to meet Chinese President Xi Jinping.

In two executive orders signed last Friday, Mr Trump called for tighter enforcement of tariffs imposed in anti-dumping and anti-subsidy trade cases, as well as a comprehensive review of the US trade deficits - measures that reflect the US' economic tensions with China.

A pair of earlier presidential Twitter posts played to the tough talk: Mr Trump said this week's meeting with China "will be a very difficult one", given the "massive trade deficits" and "job losses". But beneath the surface, the moves betrayed a trade policy in disarray, with the administration troubled by staffing deficiencies and a lack of consensus over strategic direction. With more talk than action, the orders seem more like a delaying tactic that gives administration officials the time to come up with a unified trade policy, which has eluded them so far.

The delays in instituting an overall trade policy, particularly the 90 days for reviewing trade deficits, could also have geopolitical advantages.

By putting off decisions on economic policy, Mr Trump gets an opportunity with Mr Xi this week to focus on North Korea. US officials are increasingly concerned that North Korea may already have mounted a nuclear weapon on an intercontinental ballistic missile that can reach the US or will very soon be able to do so. 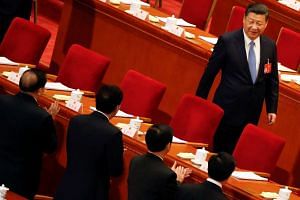 During his presidential campaign, Mr Trump criticised China for unfair trade practices, accusing it of draining millions of jobs from the US through a huge imbalance. In Mr Trump's view, that deficit was fed by Chinese currency manipulation, government subsidies to exporters and other directives aimed at giving China's home-grown players an edge.

The executive orders, though, do not really address those problems.

The 90-day review of the trade deficit, described as a comprehensive examination of the products and countries responsible for the gap, looks more like an economics classroom exercise than a foundation for policy. While portrayed as a new approach, it is the latest in a very long line-up of federal reports on trade.

The US International Trade Commission, a separate federal agency, is constantly being asked by administrations and by Congress to produce lengthy reports on specific issues. And the Commerce Department produces a very detailed monthly report on trade statistics that includes data by country and by industry.

As for improving enforcement, that is a somewhat technical issue. In the order, Mr Trump wants to ensure that the steep tariffs imposed in anti-dumping and anti-subsidy cases are collected.

Over the years, entrepreneurs have been suspected of setting up new companies in the US to import goods, often from China, in the months-long period after the government imposes such tariffs but before their exact amount is calculated. The companies bring the goods into the US and sell them, and then the companies disappear or file for bankruptcy before the final duties can be collected.

"There are many unscrupulous tricks of the trade being used - especially by China - to evade hard-won duties and thus continue cheating through the use of dumping and subsidies," said Mr Thomas Sneeringer, a former steel industry lawyer who is now president of the Committee to Support US Trade Laws, a manufacturing trade group. "These include falsifying the country of origin, transshipping, misclassifying products and outright criminal fraud."

But these cases are not an economic game changer. As little as 1 per cent of US imports are covered by steep tariffs, and the actual effect of illegal violations of these tariffs is far narrower still.

"They're politically sensitive, but in terms of the overall trade balance, they're going to have a limited effect," said Mr Alan Wolff, a former US trade official who is now a senior counsel at the law firm Dentons.

What really could make a difference for the trade deficit would be if the US imposed a border-adjusted tax. Such a move would essentially impose a tax on goods from other countries.

It would strike at the heart of the trade deficit. Each year, the US buys US$4 (S$5.60) worth of Chinese goods for each US$1 worth of US goods that China buys.

A version of this article appeared in the print edition of The Sunday Times on April 02, 2017, with the headline 'US President talks tough on trade but delays real action'. Subscribe
Topics:
More
Whatsapp Linkedin FB Messenger Telegram Reddit WeChat Pinterest Print Copy permalink