WASHINGTON (REUTERS) - President Barack Obama will pledge to use "every single aspect of American power" to destroy ISIS (Islamic State in Iraq and Syria) during a rare Oval Office address on Sunday (Nov 6) in an effort to reassure Americans his administration is handling the threat of terrorism forcefully.

The President will speak to Americans shortly after 9am Singapore time to discuss how the government has worked to keep the country safe since the Paris attacks and, going back further, since the Sept 11, 2001 attacks on New York and Washington.

Mr Obama has come under consistent pressure from Republicans to step up his response to ISIS militants in Iraq and Syria, and the shooting in San Bernardino, California last week that killed 14 people has raised fears among Americans about the threat of more attacks at home. 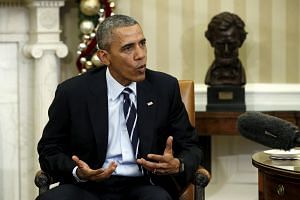 Terrorists 'outsourcing attacks on US'

Mr Obama will give an update on the status of the investigation into that shooting during his remarks. He will also express confidence that the United States will prevail over terrorist threats, the administration official said.

"The President will... discuss the broader threat of terrorism, including the nature of the threat, how it has evolved, and how we will defeat it," White House spokesman Josh Earnest said in a statement announcing the address.

"He will reiterate his firm conviction that ISIL will be destroyed and that the United States must draw upon our values, our unwavering commitment to justice, equality and freedom, to prevail over terrorist groups that use violence to advance a destructive ideology," he said, using an alternative acronym for ISIS.

Unlike previous presidents, Mr Obama rarely uses the Oval Office to make speeches to the American public, preferring to stand at a podium, often overlooking the grander White House East Room, instead.

The choice of venue was meant to send a signal of the importance Mr Obama placed on the topic and give a nod to the growing unease among Americans since the Paris and California incidents.

The President, who visited one of the sites of the Paris attacks during a trip to France last week, made a similar attempt at reassuring Americans during remarks at the White House before the Thanksgiving holiday.

Roughly a week later, the California shooting occurred. Islamic State said afterwards that the couple who carried out the massacre were its followers.