WASHINGTON (AFP) - President Barack Obama on Sunday (Jan 8, 2017) admitted that he "underestimated" the impact misinformation and hacking can have on democracies, a remark that follows an intelligence report on Russian meddling in the US presidential election.

In an interview on ABC's This Week, Obama also warned his Republican successor Donald Trump, who takes office in less than two weeks, about the difference between governing and campaigning, saying the president-elect won't be able to run his presidency "the way you would manage a family business".

Although Obama said he was not taken in by Russian hostility to the United States, "I think that I underestimated the degree to which, in this new information age, it is possible for misinformation for cyber hacking and so forth to have an impact on our open societies, our open systems, to insinuate themselves into our democratic practices in ways that I think are accelerating." 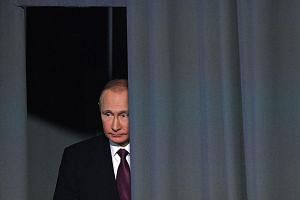 Obama ordered the intelligence report, released to the public Friday, partly "to make sure that we understand this is something that Putin has been doing for quite some time in Europe, initially in the former satellite states where there are a lot of Russian speakers, but increasingly in Western democracies".

"We have to pay attention," he said of upcoming elections in European ally nations, warning of possible interference.

Russia initially aimed its unprecedented cyber campaign at damaging a potential Clinton presidency, and then turned to supporting Trump after a victory by the real estate billionaire appeared possible, the report from the Director of National Intelligence said.

Trump, who met the country's leading intelligence agency chiefs to hear the full report, has accepted the possibility of Moscow's involvement in hacking US targets, including the Democratic National Committee, but rejected the conclusion that Russia interfered in the election.

He has also ridiculed US intelligence agencies over their findings and promised he would establish closer ties to Moscow.

Obama urged him "to develop a strong relationship with the intelligence community".

"If we're not vigilant foreign countries can have an impact on the political debate in the United States in ways that might not have been true 10, 20, 30 years ago in part because of the way news is transmitted and in part because so many people are skeptical of mainstream news organisations," he said.

"In that kind of environment, where there's so much skepticism about information that's coming in, we're going to have to spend a lot more time thinking about how do we protect our democratic process." Obama also emphasized focusing "a lot more" on cyber security.

Obama described his talks with the incoming president as "cordial".

"He has been open to suggestions," he added, describing Trump as "very engaging and gregarious."

"I've enjoyed the conversations that we've had. He is somebody who I think is not lacking in confidence," which is "probably a prerequisite for the job."

However, Obama believes Trump "has not spent a lot of time sweating the details" of policies, something he said could be "both a strength and a weakness."

"If it gives him fresh eyes, then that can be valuable. But it also requires you knowing what you don't know and putting in place people who do have the kinds of experience and background and knowledge that can inform good decision making," he said.

Obama also weighed in on Trump's constant use of Twitter.

"Clearly this worked for him, and it gives him a direct connection to a lot of the people that voted for him," he said.

But when Trump becomes president, he cautioned, "there are world capitals and financial markets and people all around the world who take really seriously what he says, and in a way that's just not true before you're actually sworn in as president".