WASHINGTON (BLOOMBERG) - US officials are preparing a final trade deal that President Donald Trump and his Chinese counterpart Xi Jinping could sign in weeks, people familiar with the matter said, even as a debate continues in Washington over whether to push Beijing for more concessions.

The US is eyeing a summit between the two presidents as soon as mid-March, said one of the people, who spoke on condition of anonymity because the preparations are confidential.

The planning has been complicated by Mr Xi's need to lead China's annual National People's Congress in early March, as well as make other foreign trips, the people said.

A White House spokesman didn't immediately respond to a request for comment.

Mr Trump will have the final call on the US side.

At a summit in Vietnam this week with North Korean leader Kim Jong Un, the US President showed he's willing to walk away if he doesn't like the terms on the table, including with China.

Talks with North Korea broke down after Mr Trump refused to lift sanctions on the country.

"Speaking of China we're very well on our way to doing something special. But we'll see," Mr Trump said at a press conference in Hanoi on Thursday (Feb 28). "I am always prepared to walk. I'm never afraid to walk from a deal, and I would do that with China, too, if it didn't work out."

Asian stocks edged higher on Friday as the latest reading on China's economy came in above expectations. Treasury yields held on to gains after a mixed set of economic signals in the US.

The preparations for a Trump-Xi summit come amid conflicting signals from the Trump administration over the prospect of a deal.

Treasury Secretary Steven Mnuchin said on Thursday the two nations are working on a 150-page document that would turn into a "very detailed agreement", though he cautioned that "we still have more work to do".

Speaking shortly before Mr Mnuchin, White House economic adviser Larry Kudlow said the countries are on the verge of an "historic" pact that would commit Beijing to cut subsidies on state-owned companies and disclose when its central bank intervenes in currency markets.

"The progress has been terrific," Mr Kudlow, director of the White House's National Economic Council, said in an interview on CNBC. "We have to hear from President Xi and the Politburo of course, but I think we're headed toward a remarkable historic deal."

US Trade Representative Robert Lighthizer told lawmakers that more work needs to be done and said the administration won't accept a deal that doesn't include significant "structural" changes to China's state-driven economy. 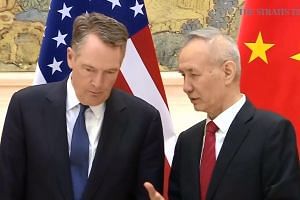 He also stressed the need for a enforcement mechanism, allowing the US to take unilateral action if China breaks the rules.

Mr Lighthizer is considered one of the more hawkish advisers among Mr Trump's trade team, along with White House official Peter Navarro, the author of Death By China.

At Mr Lighthizer's testimony this week, several lawmakers urged the administration to push for deep reforms to China's state-driven economy, rather than accepting a deal composed mostly of one-time promises to buy more American goods.

Mr Mnuchin on Thursday downplayed the notion of a rift within the administration on China.

"There's been a lot of chatter about different parts of the administration," he told CNBC in an interview from London. "We are completely united on these discussions."

Negotiations with Beijing to address structural economic reforms are taking place on a track that's separate from the talks about the quantity of American products the Chinese may agree to buy to reduce the US trade deficit, one of the people briefed on the matter said.

The Chinese have offered to ramp up purchases of American goods by US$1.2 trillion (S$1.62 trillion) over six years, according to the person.

It's still unclear how Beijing would follow through on those purchases if retaliatory tariffs remained in place and other trading barriers aren't removed, the person added.

After several rounds of face-to-face meetings between US and Chinese officials since last year, the sides are now in regular contact via phone and video-conference to hammer out the details of a deal, according to the person.

The US Trade Representative's office said on Thursday it will publish a notice in the Federal Register delaying the increase of tariffs on Chinese imports until further notice.

Mr Trump had previously planned to raise tariffs on March 1, but on Sunday dropped the threat amid progress at the negotiating table.