CHICAGO (REUTERS) - China has purchased about only half the US soybeans it pledged to buy earlier this year, a US Department of Agriculture official said on Thursday (Aug 22), after a small sale was reported amid the two countries' escalating trade war.

US President Donald Trump has vowed to impose new tariffs on Beijing starting in September, prompting China to say it had halted imports of all US agricultural goods in a trade dispute that threatens growth in the world's two largest economies.

US officials have said repeatedly they expect China to buy large quantities of soybeans as a gesture of goodwill while the two sides negotiate a trade deal.

USDA Undersecretary for Trade Ted McKinney told Reuters that Beijing was a long way from doing that.

"Very publicly in the Oval Office, they made commitments for 20 million metric tons of purchases, and only about 9 or 10 (million tonnes) have been shipped and accepted," McKinney said on the sidelines of a conference in Chicago, where he later shook hands with a delegation of Chinese buyers.

China's Commerce Ministry said on Aug 5 that Chinese companies had stopped buying US farm products and that it could impose additional tariffs on them, a move that targets rural states that supported Trump in the 2016 election.

But the world's largest soybean importer struck deals from Aug 9 to 15 to buy 9,589 tonnes for delivery of US soy in the current marketing year and 66,000 tonnes, about one cargo, for the next year, weekly USDA data showed. 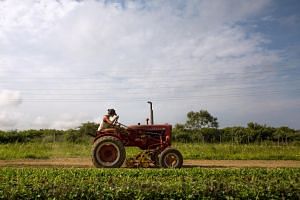 McKinney said he had not yet seen the data.

"If China has purchased, I'll celebrate that. I hope that's the case," McKinney said in an interview at the soy export conference that brought hundreds of soybean buyers from 50 countries to Chicago.

McKinney asked staff at the conference to introduce him to the Chinese delegation in attendance so he could tell its members the United States would like to keep selling soy to China, conference organisers said.

He posed for a picture with the delegation, which mostly kept a low profile. Delegations from China and Vietnam were banned from visiting US farms during their visit because of US efforts to keep African swine fever, a disease that has killed millions of pigs in China and elsewhere, out of the United States.

ONE CARGO NOT ENOUGH

China imposed retaliatory tariffs last year that remain in place on imports of US farm products including soybeans and pork. The duties have slashed exports of US crops and prompted the Trump administration to compensate American farmers for losses over two years with as much as US$28 billion of aid.

China has largely turned to South America for soybeans since the trade war began last year. US soybean sales to China in 2018 dropped 74 per cent from the previous year.

"Compared to what they used to buy, they essentially have halted - but some have gotten through," said Arlan Suderman, chief commodities economist for INTL FCStone.

The sales of 9,589 tonnes for delivery in the current marketing year will probably be rolled ahead to be delivered in the next year, which begins on Sept. 1, said Don Roose, president of Iowa-based broker US Commodities.

The cargo sold for delivery in the next marketing year could have been in the works before Beijing said Chinese companies would suspend purchases of US farm goods, said Terry Reilly, senior commodity analyst for Futures International.

"The government may have just given the green light to say: 'Let this one go through,'" Reilly said.

"One cargo is not going to change the fact that they're not buying millions of tons of soybeans."

McKinney earlier told conference attendees that the United States believed China had more to do to satisfy US demands for agriculture trade, citing biotechnology approvals and other issues.

"It has not been a fair trading relationship by any stretch of the imagination," he told Reuters after his remarks.