WASHINGTON - South-east Asia has emerged as a key arena of competition between China and the United States, but the Trump administration has fallen short in engaging with the region, said a new report by an American security think tank released on Thursday (March 21).

The Centre for a New American Security (CNAS) report recommended a series of economic, diplomatic and security moves the US and its allies could adopt to present themselves as the region's alternative to China.

Although South-east Asia lies at the frontline of Beijing's expanding diplomatic and economic influence and military muscle, it remains reluctant to more overtly side with the US, said the report.

South-east Asian countries question the durability of Washington's commitment to the region and do not perceive a comprehensive US economic strategy that offers a meaningful alternative to Chinese trade and investment, it added.

South-east Asia has been wary of being seen as an arena for great power competition, fearing that Asean will be torn apart if it is forced to side with one superpower over another.

Acknowledging this, CNAS senior fellow and report co-author Daniel Kliman told The Straits Times: "Even if countries in the region do not want it to be a domain of great power competition, China has made it so. Our view is there can be a contest without confrontation. It's not about confrontation but competition."

Though South-east Asian countries are reluctant to publicly address the competition, Hudson Institute Asia-Pacific security chair and report co-author Patrick Cronin told ST: "While South-east Asian capitals are sensitive to raising the question of China's assertiveness, they're happy to see the US talk about these issues, provided that it's not then a prelude to a conflict." 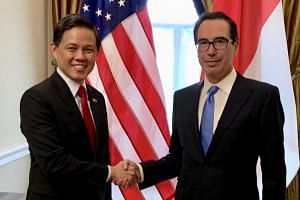 US should stay engaged in South-east Asia: Chan Chun Sing

Will S-E Asia have to choose between US and China?

The 32-page report, based on research interviews in South-east Asia and conversations with unnamed embassy officials from Asean countries, urged the US government to craft a comprehensive approach to the region covering economics, security and diplomacy.

The report called for the US to partner with Asean to carry out its 2025 master plan for regional connectivity, and launch a campaign highlighting every unlawful act conducted by Beijing in the South China Sea, among other measures.

It also urged further cooperation in the region with allies like Japan.

The report acknowledged that the Trump administration had come to realise that it needed to "get South-east Asia right" for its overall effort to compete with China to succeed, but fell short in several areas.

For instance, Vice-President Mike Pence and Secretary of State Michael Pompeo both made robust statements about continued US engagement in the region at high-profile summits last year, and the Better Utilisation of Investments Leading to Development (Build) Act doubled the government's development finance capacity to US$60 billion (S$80 billion).

The Asia Reassurance Initiative Act, which authorised US$1.5 billion for American programmes in Asia, also indicated strong congressional support for increased US engagement in the Indo-Pacific, said the report.

But other initiatives which addressed key regional needs like the Digital Connectivity and Cybersecurity Partnership were overshadowed by the limited funding they received, it noted, adding that "the region is likely to harbour suspicions about President Donald Trump's personal commitment to deliverables".

Several key posts, including the ambassador positions to Asean and Singapore, have stayed empty, and the President's absence from last year's Asean summit and related meetings was not encouraging.

"If Trump sits out another series of trips to the region, he will stoke fears that his administration undervalues its strategic importance," said the report.