Memorial event to honour lives lost; nation may have to wait till year end for normal life to return, says Fauci

WASHINGTON • The United States was on the brink yesterday of the grim milestone of 500,000 Covid-19-related deaths since the start of the pandemic, as the nation's top virus expert warned that a semblance of normalcy may not return until the end of the year.

A White House spokesman said President Joe Biden and Vice-President Kamala Harris, together with their spouses, would hold a moment of silence yesterday at a memorial event and that there would be a candle-lighting ceremony at sundown.

Mr Biden last month observed America's Covid-19 deaths on the eve of his inauguration with a sundown ceremony at the Lincoln Memorial's Reflecting Pool.

The President would use "his own voice and platform to take a moment to remember the people whose lives have been lost, the families who are still suffering... at what is still a very difficult moment in this country", White House spokesman Jen Psaki told reporters on Friday.

Signs of hope were emerging with the roll-out of vaccines and the dropping off of a massive winter spike in infections, but the heavy toll continues to mount in a nation that has reported the most fatalities and cases in the world.

"It's terrible. It is historic. We haven't seen anything even close to this for well over a hundred years, since the 1918 pandemic of influenza," Dr Anthony Fauci, chief medical adviser to Mr Biden, said on Sunday.

"It's something that is stunning when you look at the numbers, almost unbelievable, but it's true," he added, as the death toll on the Johns Hopkins University tracking website stood at some 498,000.

After the first Covid-19 death was announced in the US in February last year, it took about three months to pass the 100,000 mark, during a first wave that hit New York particularly hard.

However, the pace of deaths increased, with the toll jumping from 400,000 in just over a month amid a spike that was fuelled in part by holiday gatherings.

Dr Fauci said the number of daily new infections was declining after peaking last month, but normal life may still be some way off.

Mr Biden said last week the programme to deliver vaccines into people's arms is as complicated as the already intense challenges of manufacturing them in huge quantities at speed. 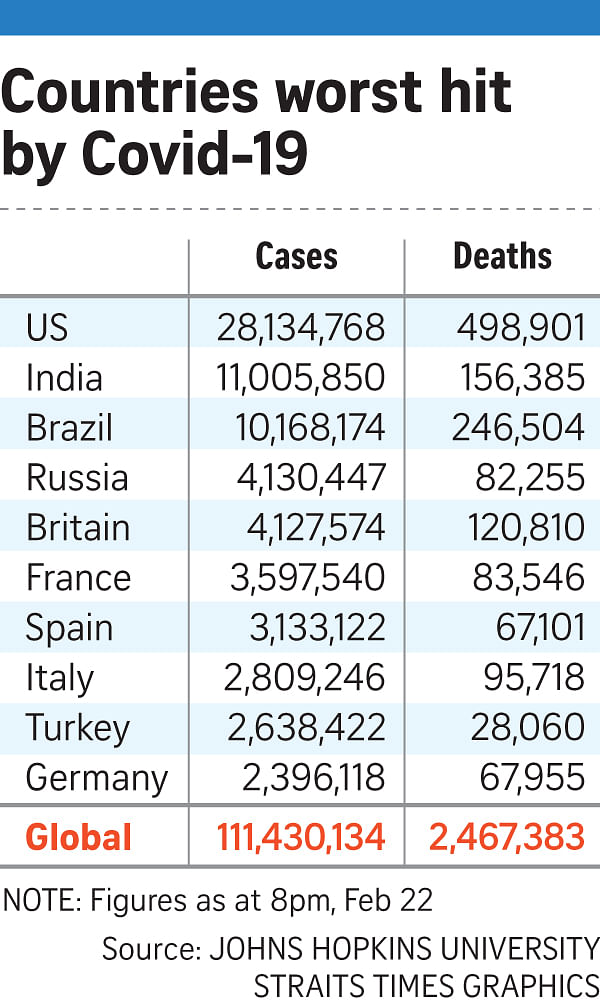 "There has never, ever, ever been a logistical challenge as consequential as what we're trying to do, but we're getting it done," he added.

According to Mr Biden, his goal of administering a million shots a day for a total of 100 million in the first 100 days of his presidency is on track to be easily surpassed, with a current average of 1.7 million vaccinations a day.

With the US death toll set soon to pass 500,000, he said he did not want to give firm predictions of when the crisis will be curbed.

However, he said 600 million doses - enough for the two-dose regimen to most of the US - were expected to be ready by the end of July.

More than 61 million people have received at least one shot of vaccine in the country, with some 18 million already getting the full two doses.

The freezing weather and snow storms that hit the US for over a week have slowed the inoculation efforts, with some six million doses delayed.

Though concern has grown around variants of the virus, especially those that appear to spread more easily and render current shots less potent, Dr Fauci sounded a hopeful note on whether another surge was coming.

"I don't think at all that it is inevitable," he told CNN.

"The vaccines we are currently distributing now, the Moderna and Pfizer vaccines, work very well against the UK variant."

America might be past the worst of the pandemic but the damage is deep and painful.

To illustrate this milestone of half a million deaths, The New York Times published a front-page graphic running the length of the page, with each small point representing a dead American.

The bottom of the column, which represents the deaths of recent months, is particularly dark and almost uniformly black.