WASHINGTON (NYTIMES) - Lawmakers in Congress from both political parties have accused the Trump administration of delaying an US$8 billion (S$10.96 billion) sale of F-16 fighter jets to Taiwan, the self-governing democratic island off the coast of China that is supported by the United States.

Chinese officials have said they object strongly to the sale of 66 jets requested by Taiwan, which would be by far the largest such purchase by its government in many years.

Lawmakers are now questioning whether the Trump administration is delaying approval of the sale, either to avoid upsetting Beijing while delicate trade negotiations are underway or to use it as a bargaining chip.

Any such move by the administration would ignite intense bipartisan opposition in Congress.

"Our support for Taiwan through arms transfers is not up for negotiation with Beijing," Representative Michael McCaul of Texas, the top Republican on the House Foreign Affairs Committee, told The New York Times on Monday (July 29).

"I will support the sale of F-16s to Taiwan as soon the State Department notices them to our committee, which I expect to happen soon," Mr McCaul said.

Senator Robert Menendez of New Jersey, the top Democrat on the Senate Foreign Relations Committee, said the Trump administration "is possibly obstructing the sale of F-16 fighter jets to Taiwan so the President can use them as leverage in his failing trade war with China".

"Taiwan's defence cannot be a bargaining chip to be cashed in for a smile from China's dictatorship," Mr Menendez said on Monday.

Treasury Secretary Steven Mnuchin and Mr Robert Lighthizer, the US trade representative, are expected to meet in Shanghai with Chinese negotiators on Tuesday and Wednesday. 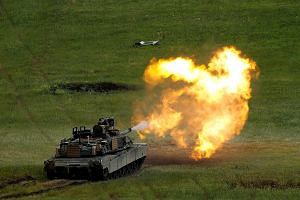 China urges US to cancel $3b arms sale to Taiwan

Trump does not consider China an enemy, adviser says

President Donald Trump and President Xi Jinping of China agreed to restart talks during a meeting on June 29 in Osaka, Japan.

Lawmakers who oversee foreign policy in Congress had expected the State Department to sign off on the fighter jet sales by last week, before the House went on recess.

But Secretary of State Mike Pompeo has not yet approved the official notification to allow the sales to move forward.

The Senate leaves Washington on Friday and Congress is not scheduled to return until Sept 9.

A Senate aide described hesitation by administration officials to move forward with the sales "in light of the ongoing negotiations with China".

Mr Jeff Emerson, a spokesman for the trade representative, said Mr Lighthizer had not suggested delaying the arms sales or offered it as a bargaining chip in the trade talks.

The deal for the F-16s, which are made by Lockheed Martin, would be the second batch of arms sales to Taiwan by the Trump administration. However, it is much larger and more sensitive than the earlier sale.

On July 8, the State Department notified Congress that it was moving ahead with a sale of 108 M1A2T Abrams tanks and other weapons to Taiwan, a package worth more than US$2 billion.

Unless Congress raises objections within one month of formal notification, the sale will go through.

The Act requires the United States "to provide Taiwan with arms of a defensive character".

China insists Taiwan is part of its territory and Beijing has for years objected to the sales.

That has prompted the United States to try to draw as little attention to the arms purchases as possible by approving them in intermittent batches.

Taiwan has had a long-standing request for new F-16s, which has provoked especially vehement objections from Beijing, given that the jets could be used to bomb mainland China.

Some Trump administration officials have taken hardline stands against China based on national security concerns.

Others have argued that maintaining stable economic ties with Beijing is more important.

Mr John Bolton, the White House national security adviser, has long been an outspoken defender of Taiwan and a proponent of arms sales.

In a January 2017 opinion article, Mr Bolton wrote that Mr Trump should play the "Taiwan card" to counter China's hegemonic moves in Asia.

Mr Bolton even suggested that the United States should restore diplomatic relations with Taiwan.

Mr Pompeo has been less brazen on Taiwan policy and his priority is to stay in step with Mr Trump, but he has spoken about competing with China to keep it from spreading authoritarian ideas.

Economic advisers to Mr Trump have refrained from taking tougher actions against China to avoid jeopardising a potential trade deal, a goal that the President is eager to reach before the 2020 presidential election.

The Treasury Department has objected to proposals to impose sanctions on Chinese officials for the detention of more than one million Muslims, according to administration officials.

Mr Trump takes a transactional view of China. He started a trade war to push a deal that would narrow the trade deficit, but rarely if ever speaks of China as an adversary or strategic threat.

In Osaka, Mr Trump said he saw the United States and China as "strategic partners" and he constantly praises Mr Xi.

The President has also suggested that any national security concerns over Huawei, the Chinese telecommunications company, could be brushed aside if China enters a favourable trade deal with the United States.

"Trump does not see China as an enemy," said Dr Michael Pillsbury, a scholar of the Chinese military at the Hudson Institute who has informally advised the White House.

"In fact, he has shown remarkable restraint when it comes to China."

One of the officials, who works for a senior Republican lawmaker, said he expected Mr Bolton and perhaps Mr Pompeo to press Mr Trump this week to approve the sales, though Mr Pompeo leaves for Thailand on Tuesday.

That official compared Mr Trump's reluctance to embrace the sales to the White House's hesitation to impose sanctions on Turkey over its purchase of the Russian S-400 anti-aircraft system.

Mr Trump has shown an affinity for strongman leaders, whether it is Mr Xi or President Recep Tayyip Erdogan of Turkey or President Vladimir Putin of Russia.

"Using Taiwan as a bargaining chip in our economic relationship with China plays right into Beijing's hands and only leaves Taiwan more vulnerable to Chinese coercion," said Ms Kelly E. Magsamen, the Pentagon's top Asia-Pacific policy official at the end of the Obama administration.

"It's Taipei's worst nightmare. It means they could be on the table in bigger ways."

Taiwan has an ageing fleet of F-16s and had asked to buy new ones more than a decade ago.

Neither President George W. Bush nor President Barack Obama approved the sales, but the Obama administration decided in 2011 to refurbish Taiwan's existing fleet.

At the time, Senator John Cornyn, a Republican from Texas, where the F-16s were made, said Mr Obama's decision marked "a sad day in American foreign policy".

In April, Lockheed Martin announced it had moved F-16 production to South Carolina, the home state of Senator Lindsey Graham, a vocal Republican supporter of Mr Trump, though the two sometimes clash on foreign policy.

Tensions between China and Taiwan have been rising this month.

President Tsai Ing-wen of Taiwan, seen as an adversary by Communist Party leaders in Beijing, hosted a reception for United Nations officials on July 11 in New York on a trip to visit Caribbean nations, and stopped in Colorado on her way home.

On July 14, Beijing announced that it would carry out military exercises near the Taiwan Strait.

The United States has been sending naval ships through the Taiwan Strait about once each month in freedom-of-navigation actions. In April, a French warship passed through, in a rare move encouraged by the United States.