SAN FRANCISCO (AFP) - A US trade judge ruled on Tuesday (March 26) that Apple had violated a Qualcomm chipmaker patent and said she would recommend banning imports of some iPhones.

International Trade Commission administrative law specialist MaryJoan McNamara wrote in a ruling that she would be recommending a "limited exclusion order together with a cease and desist order" against Apple.

The company will not be required to post a bond while the order is under review by US President Donald Trump because the iPhones don't directly compete with any Qualcomm products, according to the ruling.

The Californian tech giants have been locked in a long-running battle over patents and royalties that has played out in courts and administrative bodies worldwide.

Apple accuses Qualcomm of charging for invalid patents and claims the chipmaker was seeking a disproportionate amount for a single component.

Last week, Qualcomm won a $31 million verdict in its multi-front war with Apple over patented technology used in iPhones.

A jury in a federal court in Southern California ordered Apple to pay Qualcomm for patent infringement for chips used on iPhone 7, 8 and X models.

Patents at issue in that case involved "flashless booting" that allows devices to connect quickly to the internet after being turned on and technology that lets smartphone apps move online data efficiently. 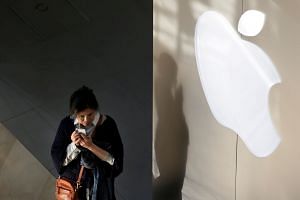 A third patent related to promoting rich graphics in games while protecting battery life, according to Qualcomm.

On another front, a federal judge in southern California issued a preliminary ruling that Qualcomm owes Apple nearly $1 billion in patent royalty rebate payments the chipmaker is withholding, according to US media reports.

Apple sued Qualcomm two years ago over the payments, which were part of a contracted arrangement. The judge's decision will be on pause until after a trial in the case.

Qualcomm late last year escalated a legal war with Apple, accusing the iPhone maker of stealing secrets and sharing them with mobile chip rival Intel, according to court documents.

Apple's goal was to buy mobile chips from Intel instead of depending on Qualcomm, the dominant maker of mobile phone processors and has argued that Qualcomm abuse of its dominant position was harmful to the whole industry.