An Immigration Court judge in Illinois has accepted Singaporean blogger Amos Yee's application for political asylum in the United States, setting a date for a full hearing on March 7.

In a brief, 10-minute hearing on Monday (Jan 30, US time), Mr Yee's lawyer Sandra Grossman appeared in person before the judge while Mr Yee appeared via video conference from the jail where he has been in detention since arriving in the US on Dec 16 last year.

"We stressed that he is persecuted in Singapore because of his critical political views, and that he has been subjected to an illegitimate process in Singapore," Ms Grossman told The Straits Times over the phone.

Mr Yee will remain in detention until the hearing, unless Immigration and Customs Enforcement (ICE) grants him parole in which case he will be released. He is being held at the McHenry County Adult Correctional Facility in Woodstock, Illinois.

The Immigration Court has no jurisdiction to decide on his detention. However, if he is released, his hearing date would be pushed back and it could take years for him to complete the asylum process, Ms Grossman said.

Amos Yee may have to wait years in US asylum bid 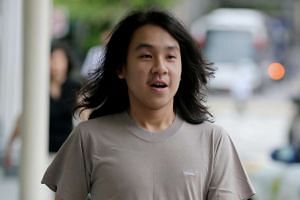 Blogger Amos Yee, who is seeking US asylum, regrets making inflammatory posts which landed him in jail

Amos Yee detained in US

"He wants to be released as soon as possible, we have already made the request to ICE and we will be renewing that request," she added.

If he stays in detention, the hearing will be on March 7. It would be a longer hearing of over several hours, and involve depositions from witnesses in court, she said. The case could be decided on the basis of that hearing itself, she added.

"But Amos Yee is in a much better position than those outside the country because he is here and as such has the right to due process," she said.

The 18-year-old arrived in the US on a tourist visa with a round-trip ticket from Singapore, landing at Chicago's O'Hare International Airport on Dec 16.

According to an account posted online by US-based Singaporean activist Melissa Chen, a Customs and Border Protection officer flagged him for secondary inspection where "they seized his electronic devices and found text messages between Amos and me, where we had been making arrangements for his bid for political asylum in the US".

"Amos was compelled to tell the truth," she said. "The US has acted totally according to procedure here. He won't be released until a hearing/interview."

In their earlier statement on Jan 12 on the case, the law firm Grossman Law LLC said: "If Mr Yee is released from custody, due to backlogs in the Immigration Courts, it may take years for his claim to be heard.

"With more than 520,000 cases pending in US immigration courts, asylum applicants from all over the world are subjected to lengthy wait times, separation from family, legal limbo, and an adjudicatory system that is increasingly void of basic due process guarantees.

"Counsel has requested humanitarian release or release on parole and submitted evidence… that Mr Yee qualifies for release."