The United States is fully committed to the US-Asean strategic partnership, US Deputy Secretary of State John Sullivan said after co-chairing a US-Asean ministerial meeting on Thursday, on the sidelines of the United Nations General Assembly.

"We reaffirmed the US-Asean strategic partnership and discussed US commitment to a free and open Indo-Pacific region with Asean at its centre, in which independent nations with diverse cultures and aspirations can prosper side by side in freedom and peace," Mr Sullivan told journalists.

"During our meeting, I highlighted the United States' commitment to upholding international law, including freedom of navigation in the South China Sea," he added.

"On the South China Sea, there was unanimity; what everyone, including the United States, is looking for is resolution of disputed claims, not unilaterally, but we want international law to be followed and for there to be a peaceful process," he said.

"I would say there is consensus, a commitment by Asean and the United States to the rule of law and not unilateral actions by one country to develop features in the South China Sea and, even worse, to militarise them." 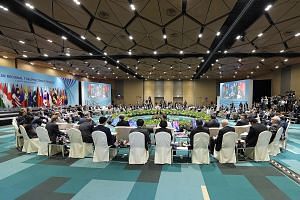 $410m fund 'shows US is committed' to South-east Asia

"I did not hear from Asean any support for any exceptions to the UNSC resolutions," Mr Sullivan said.