NEW YORK • The US authorities gathered information about Huawei Technologies through secret surveillance that they plan to use in a case accusing the Chinese telecom equipment maker of busting sanctions and bank fraud, prosecutors have said.

Assistant US Attorney Alex Solomon said at a hearing in federal court in Brooklyn on Thursday that the evidence, obtained under the US Foreign Intelligence Surveillance Act (Fisa), would require classified handling.

The government notified Huawei in a court filing on Thursday of its intent to use the information, saying it was "obtained or derived from electronic surveillance and physical search", but gave no details.

The United States has been pressuring other countries to drop Huawei from their cellular networks, worried that its equipment could be used by Beijing for spying. The company says the concerns are unfounded.

Mr Brian Frey, a former federal prosecutor who is not involved in the Huawei case, said Fisa surveillance, which requires a warrant from a special court, is generally sought in connection with suspected espionage.

"The reason they typically would have gotten the surveillance through a Fisa court is where we suspect someone may be spying on behalf of a foreign power," Mr Frey said. The US government has been concerned about espionage by Huawei for years, he added.

In the Brooklyn case, Huawei and its chief financial officer, Meng Wanzhou, are accused of conspiring to defraud HSBC Holdings and other banks by misrepresenting Huawei's relationship with Skycom Tech, a suspected front company that operated in Iran. 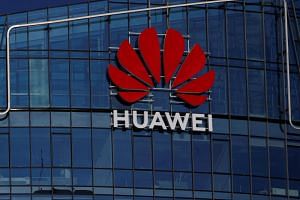 Meng was arrested in Canada in December at the request of the US to face the charges of bank and wire fraud laid out in the indictment, which was not unsealed until January. She has said she is innocent and is fighting extradition.

Huawei last month pleaded not guilty to the 13-count indictment.

Mr Chasen Skinner, a spokesman for the company, declined to comment on Thursday on the secret US surveillance, saying that the company does not comment on pending litigation.

Huawei has said that Skycom was a local business partner, but prosecutors said in their indictment against Huawei and Meng that it was an unofficial subsidiary used to conceal Huawei's Iran business.

The US authorities claim that Huawei used Skycom to obtain embargoed US goods, technology and services in Iran, and to move money via the international banking system.

The charges against the company include violating US sanctions on Iran.

Reuters also broke the news of the bank fraud charges in December, and exclusively reported in February how an internal HSBC probe helped lead to the charges against Huawei and Meng.

The US sanctions investigation was spurred by Reuters reports more than six years ago that Skycom offered to sell embargoed Hewlett-Packard computer equipment to Iran's largest mobile-phone operator, and detailed the close ties between Huawei and Skycom.

Mr Trump told Reuters in December last year that he would intervene in the case if it helped to secure a trade deal with China. Meng's lawyers have expressed concerns that she is a pawn.

The next court date in the Brooklyn case is set for June 19.

A version of this article appeared in the print edition of The Straits Times on April 06, 2019, with the headline 'US found evidence against Huawei via secret surveillance: Prosecutors'. Subscribe
Topics:
More
Whatsapp Linkedin FB Messenger Telegram Reddit WeChat Pinterest Print Copy permalink