With emergency sirens blaring as the Missouri River rose to the top of the three-storey-high levee wall in St Joseph, about 88km north of Kansas City, sheriff's deputies rushed door to door urging residents to flee to higher ground.

About 1,500 residents and 6,000 employees of neighbouring businesses were ushered out of the southern end of town.

Most of the evacuated dwellings were trailer homes interspersed among factories, warehouses and stockyards along a stretch of the riverfront known as "the Bottoms". Residents looked stunned as they scurried out of their homes with hurriedly gathered belongings to join a steady stream of cars, pickup trucks, SUVs and tractor-trailers.

The evacuation, coming as the river rose just over 4.57m above flood stage appeared to take the authorities and residents by surprise.

"We don't have anywhere to go. This is overwhelming," said Ms Linda Roberts, 70, as she and husband John, 66, packed their SUV.

With the police doing their best to direct gridlocked traffic and with helicopters whirring overhead, dust billowed up from packed roadways for hours, as the mass exodus proceeded in slow motion. 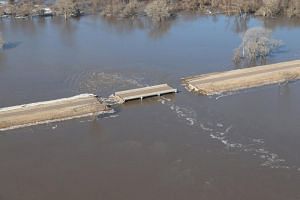 More flooding in store for storm-hit US Midwest

The Missouri River flooding was triggered by last week's "bomb cyclone" storm, which killed at least four people and closed dozens of roads across a large swathe of Nebraska and Iowa. Property and financial losses for the two Midwestern states were projected to surpass US$3 billion (S$4 billion).

Torrential showers over hundreds of square kilometres of melting snow-pack produced record volumes of run-off that poured into the Missouri just above the Gavins Point Dam where the river divides Nebraska from South Dakota. The dam is operated by the US Army Corps of Engineers.

A version of this article appeared in the print edition of The Sunday Times on March 24, 2019, with the headline 'US flooding forces 7,500 to evacuate'. Subscribe
Topics:
More
Whatsapp Linkedin FB Messenger Telegram Reddit WeChat Pinterest Print Purchase Article Copy permalink