SAN FRANCISCO • Digital security and infrastructure firm Cloudflare has terminated its services to 8chan, the message board where the El Paso gunman reportedly posted a racist "manifesto" shortly before killing 20 people in the US state of Texas.

In a blog post on Sunday announcing the move, Cloudflare chief executive officer Matthew Prince described the no-censorship site as "a cesspool of hate".

"8chan is among the more than 19 million Internet properties that use Cloudflare's services. We just sent notice that we are terminating 8chan as a customer effective at midnight tonight Pacific Time," Mr Prince wrote.

"The rationale is simple: they have proven themselves to be lawless and that lawlessness has caused multiple tragic deaths.

"Even if 8chan may not have violated the letter of the law in refusing to moderate their hate-filled community, they have created an environment that revels in violating its spirit."

Other right-wing extremists, misogynists and conspiracy theorists have posted to 8chan, which does not moderate content.

At least three mass shootings this year - including the mosque killings in Christchurch, New Zealand, and the synagogue shooting in Poway, California - have been announced in advance on the site, often accompanied by racist writings that seem engineered to go viral on the Internet.

Mr Fredrick Brennan started the online message board in 2013 as a free speech utopia.

CAN'T MOVE ON WITH LIFE

Another 8chan shooting? Am I ever going to be able to move on with my life?

MR FREDRICK BRENNAN, who started 8chan in 2013, in a tweet on Saturday after the El Paso massacre. He gave up control of the online message board in 2015.

But now, 8chan is known as something else: a megaphone for mass shooters, and a recruiting platform for violent white nationalists.

8chan has been run out of the Philippines by US Army veteran Jim Watkins since 2015, when Mr Brennan gave up control of the site.

Mr Brennan has tried to distance himself from 8chan and its current owners. 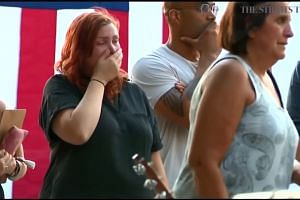 In Pictures: Tributes pour in for victims of two deadly mass shootings in US

29 killed in two separate mass shootings in US

In a March interview with The Wall Street Journal, he expressed regrets over his role in the site's creation and warned that the violent culture that had taken root on 8chan's boards could lead to more mass shootings.

"Another 8chan shooting?" he tweeted on Saturday after the El Paso incident. "Am I ever going to be able to move on with my life?"

Mr Watkins has resisted calls to moderate or shut down the site.

Cloudflare's move terminating its cyber security and other services means 8chan could be exposed to distributed denial-of-service (DDoS) attacks, in which hackers take down a site by flooding it with fake traffic.

Mr Prince said the network service provider had not taken the decision lightly.

"We reluctantly tolerate content that we find reprehensible, but we draw the line at platforms that have demonstrated they directly inspire tragic events and are lawless by design," he wrote. "8chan has crossed that line."

Shortly before the El Paso mass shooting on Saturday, the suspect - named by the media as Patrick Crusius, who is white - was believed to have posted a racist "manifesto" on 8chan that includes passages railing against the "Hispanic invasion" of Texas.

Despite Cloudflare's move, Mr Prince said terminating services to sites like 8chan would not make the Internet safer or reduce online hate.

Two years ago, after a far-right rally in Charlottesville, Virginia, in which a woman was killed, Cloudflare stopped providing services to neo-Nazi website The Daily Stormer.

"Today, the Daily Stormer is still available and still disgusting. They have bragged that they have more readers than ever. They are no longer Cloudflare's problem, but they remain the Internet's problem," Mr Prince wrote.

"Unfortunately, the action we take today won't fix hate online. It will almost certainly not even remove 8chan from the Internet. But it is the right thing to do. Hate online is a real issue."