One of the executives, Tim Leissner, who was one of Goldman's top investment bankers in Asia, has pleaded guilty in a federal criminal investigation of the fraud and has been ordered to forfeit about US$44 million.

The other executive, Roger Ng, has been charged in the United States with participating in money laundering and bribery, but is in custody in Malaysia.

Goldman Sachs helped the fund, 1Malaysia Development Berhad, commonly known as 1MDB, sell more than US$6 billion of debt to investors, ostensibly for projects that would benefit the Malaysian people.

But federal prosecutors contend that at least US$2.7 billion of that money went to fuel the lavish lifestyles of several people close to a former Malaysian prime minister, including flamboyant Malaysian financier Jho Low.

Prosecutors have said some of the money raised for the fund went toward paying bribes to secure business for Goldman Sachs.

Low, who also has been charged in the United States and Malaysia, attended at least two meetings where Lloyd Blankfein, the former Goldman chief executive officer, was present. But Goldman Sachs has painted Leissner, husband of fashion designer and model Kimora Lee Simmons, as a rogue operator who bears the responsibility for the bank's role in the scandal.

The bank has said that it took steps to make sure that neither Low nor any other intermediaries played a role in arranging the 1MDB financing deals. 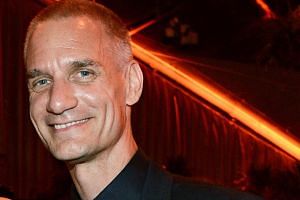 "Given the Department of Justice's charges last year, this development is hardly surprising," said Jake Siewert, a Goldman spokesman.

Federal prosecutors and banking regulators have continued to investigate Goldman's role in the scandal. The bank has said it faced the prospect of a significant fine to resolve the matter.

In addition to permanently barring Leissner from the banking industry, the Fed fined him US$1.4 million. Banking authorities in Singapore barred Leissner from working in that country late last year.

A lawyer for Leissner, who consented to the Fed ban, declined to comment. He is free on bail, which was originally set at US$20 million. But the specific terms of Leissner's bail were kept under seal when a redacted version of a transcript of his Aug 28 guilty plea was made public in November.

Lawyers for The New York Times asked a federal judge last month to unseal the portions of the transcript that describe the terms of Leissner's bail.

Leissner is scheduled to be sentenced June 28.

Ng's lawyer, Marc Agnifilo, declined to comment on the Fed's action Tuesday. He previously said his client planned to plead not guilty after he was returned from Malaysia to face the pending charges filed by US prosecutors in federal court in New York City.

Investigators in the United States have said 1MDB was raided by former Malaysian Prime Minister Najib Razak and other officials, including Low, with billions of dollars in siphoned funds used on luxuries, including diamonds, designer handbags and fine art, and to help finance the Hollywood film "The Wolf of Wall Street."

Najib was ousted in last year's election and charged by Malaysian prosecutors with money laundering in August.

Low, who remains at large, is believed to be staying in China.