WASHINGTON (REUTERS) - Top leaders in the House of Representatives on Tuesday (March 13) introduced a bill offering a pathway to citizenship for more than 2 million undocumented immigrants, resurrecting an issue that has put Democrats bitterly at odds with US President Donald Trump.

The Dream and Promise Act of 2019 aims to help immigrants who were brought illegally to the US as children, known as Dreamers, who face possible deportation.

House Speaker Nancy Pelosi said, "We take a historic step to protect patriotic men and women who in being here in the wisdom of Ronald Reagan make America more American."

About 700,000 of the Dreamers are protected under an Obama-era program called the Deferred Action for Childhood Arrivals program or Daca.

Trump has been trying to end the DACA program, but his executive order has been blocked in the courts and now awaits a review by the Supreme Court. The House bill would grant Dreamers the chance to become permanent U.S. residents and eventually apply to be citizens.

To be eligible, Dreamers would have to be employed, serve in the military, or be enrolled in higher education.

The House bill would also help immigrants from countries hit by civil conflicts or natural disasters who have temporary protected status, known as TPS. 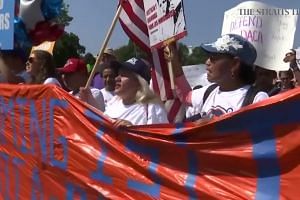 US appeals court rules against Trump on 'Dreamers' immigration programme

More than 300,000 immigrants from El Salvador, Haiti, Nicaragua and Sudan have TPS, but Trump has been trying to terminate that program as well.

While the bill is likely to pass the Democratic-controlled House, Republicans who control the Senate have in the past denounced such efforts as amnesty.

The legislation comes a day after Trump introduced his 2020 budget proposal, which includes US$8.6 billion (S$11.6 billion) to build a wall on the US-Mexico border.

The move is likely to renew a fight that led to last winter's 5-week government shutdown.