WASHINGTON • The Trump administration warned that too much of the US defence industry is dependent on China or vulnerable to hacking directed by Beijing, part of a mounting campaign to pressure the Chinese government.

The nearly 150-page report released last Friday by the Pentagon concluded that there are nearly 300 vulnerabilities that could affect critical materials and components essential to the US military.

"All facets of the manufacturing and defence industrial base are currently under threat, at a time when strategic competitors and revisionist powers appear to be growing in strength and capability," according to the report, which accused China of a range of anti-competitive practices described as threatening US national security.

The report, ordered by President Donald Trump last year, is the latest shot at China by the Trump administration as it mounts a trade war that has spilled over into increasingly tense relations with the Chinese military. The Defence Department took the lead on the study.

China's cyber espionage, forced technology transfers, currency manipulation and "aggressive trade and infrastructure policies" all put the US at risk, the report said.

It was released hours after Vice-President Mike Pence gave a speech assailing Chinese aggression and outlining plans by the administration to take a tougher stance against Beijing on trade, human rights and defence.

"Beijing is employing a whole-of-government approach, using political, economic and military tools, as well as propaganda, to advance its influence and benefit its interests in the United States," Mr Pence said in the address at the Hudson Institute in Washington, just days after Mr Trump accused China of attempting to meddle in the upcoming US mid-term elections.

Ms Hua Chunying, a Chinese Foreign Ministry spokesman, said in a statement that Mr Pence's speech "made unwarranted accusations against China's domestic and foreign policies and slandered China by claiming that China meddles in US internal affairs and elections".

The report highlights risks posed by China's dominance in technology supply chains, including in printed circuit boards, where US based companies have a shrinking footprint. 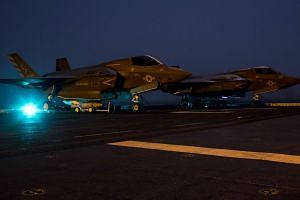 Mattis looks for 'way ahead' after China scraps military talks

Bloomberg Businessweek reported last Thursday that China exploited vulnerabilities in the US technology supply chain to sneak spy chips onto servers used by US companies.

Amazon and Apple were among almost 30 companies infiltrated, according to the report.

In its report, the Trump administration found that Chinese domination of technology supply chains raised the danger "Trojan chips" would infiltrate US defence systems.

"With the migration of advanced board manufacturing offshore, DoD risks losing visibility into the manufacturing provenance of its products as many domestic manufacturers have offshore manufacturing facilities or relationships," the report said, using an acronym for the Defence Department.

The report also said that a single Chinese manufacturer accounts for 70 per cent of the commercial drone market, "including a dominance in the small unmanned aerial system sub-sector".

Because of concerns "around security of the software associated with the platform", the army issued a memo last year ordering soldiers to stop using applications created by the Chinese company, according to the report.

The decline of US manufacturing in recent decades has reduced domestic suppliers of several goods used by the military, including some textiles, night-vision components, metals, batteries and other electronics, according to the report.

A shortage of workers skilled in the fields of science, technology, engineering and maths has also handicapped the US, it added.

As many as 25 per cent of graduates from US colleges with degrees in such fields are Chinese nationals, the report found. It called for more training of US workers in those fields.

A version of this article appeared in the print edition of The Sunday Times on October 07, 2018, with the headline 'US defence at risk as industry relies on China, warns report'. Subscribe
Topics:
More
Whatsapp Linkedin FB Messenger Telegram Reddit WeChat Pinterest Print Purchase Article Copy permalink