NEW YORK • There is little precedent where a plane-maker has faced charges over a deadly air crash. But in the wake of two tragedies involving Boeing's 737 Max planes since October, US federal authorities are conducting a criminal probe to determine whether the company lied to regulators about the safety of the jet.

The probe was initiated after the first catastrophic crash of a Lion Air B-737 Max jet soon after take-off from Jakarta on Oct 29 last year, according to a person who was not authorised to speak about the investigation and asked not to be named.

The accident had triggered questions over whether the plane's new anti-dive system was to blame. Less than five months later, an Ethiopian Airlines B-737 Max 8 crashed near Addis Ababa on March 10. Nearly 350 people died in both disasters.

Boeing and the US regulator are now facing intense scrutiny over the plane's avionics and how the aircraft was certified.

On Tuesday, the Transportation Department's inspector-general said it was conducting a review of how the plane was certified to fly, while a grand jury under the US Justice Department is seeking records in a possible criminal probe of the plane's certification.

But prosecutions are unusual following US air disasters, where investigators focus on determining the cause of a crash so it can be fixed.

"We want to encourage people to come forward and admit mistakes, free from fear of reprisal or jail," said Mr Kenneth Quinn, a former chief counsel of the Federal Aviation Administration (FAA), who now represents airlines and aerospace companies.

"The last thing the industry and FAA need is the spectre of a criminal investigation hovering over an accident inquiry."

The government could bring fraud charges if it determines the company lied to the authorities or tried to cover up concerns about the aircraft's systems, the former prosecutors said.

While a criminal case against Boeing seems unlikely, "it could be a legal nightmare" for the company if it misled regulators or hid information to speed up approval of the B-737 Max design, said Mr Marc Moller, who represents victims and families in air crash claims. 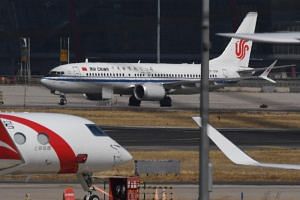 The FAA could impose a whopping fine and victims' families could demand large cash settlements or punitive damages, he said.

Boeing's plans to get its B-737 Max aircraft back in the sky after they were grounded worldwide suffered a setback after Europe and Canada said on Tuesday they would seek their own guarantees over the safety of the aircraft. "We will not allow the aircraft to fly if we have not found acceptable answers to all our questions," European Union Aviation Safety Agency executive director Patrick Ky told an EU Parliament committee hearing.

Meanwhile, Canada said it would independently certify the B-737 Max in the future, rather than accepting FAA validation. Regulator Transport Canada said on Tuesday it would conduct an "exhaustive review" of Boeing's flight control system - called the Manoeuvring Characteristics Augmentation System - used in the B-737 Max jets, which has been blamed for the crashes.

The declarations came even as the FAA analyses Boeing's plans for a software fix prompted by the first crash five months ago.

Facing its biggest crisis in years, Boeing's commercial airplane division has brought in a new vice-president of engineering while dedicating another top executive to the aircraft investigations, a company e-mail showed on Tuesday.

The shake-up showed how the world's largest plane-maker was freeing up engineering resources as it faces scrutiny during crash investigations while also maintaining production of its money-spinning B-737 single-aisle aircraft.

Meanwhile, US President Donald Trump on Tuesday named Mr Stephen Dickson, a former Delta Air Lines executive, as his choice to become the permanent head of the FAA.

Mr Dickson retired as Delta's senior vice-president of flight operations last year after a 27-year career at the company, during which he flew commercial routes and also oversaw safety, pilot training and regulatory compliance.