CHICAGO (AFP) - Firefighters on Wednesday (March 20) extinguished a raging chemical plant fire that had burned since Sunday near the US city of Houston, creating a plume of black smoke that panicked residents.

The Intercontinental Terminals Company (ITC) said the blaze at its plant on the outskirts of the Texas city was extinguished at around 3am.

The burning storage tanks filled with chemicals used in gasoline mixtures and paint thinners left many residents worried about exposure to the fumes.

"The fires have been extinguished," ITC spokeswoman Alice Richardson told a news conference.

She said crews continued to spray foam on the group of storage tanks that had caught fire, to prevent the blaze from breaking out again.

"Re-ignition is possible, but with every passing hour the risk of that is reduced," Richardson said.

There were no serious injuries reported from the fire.

The chemicals burning at the facility had the potential to cause coughing, difficulty breathing, irritation to the eyes, nose and throat, headaches, nausea or dizziness, according to public health officials. 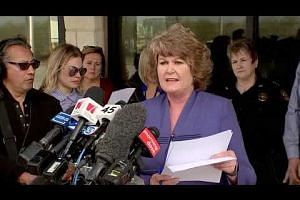 "From the start of this up until today... we've measured no hazardous levels of concentration," Adam Adams of the US Environmental Protection Agency said.

Despite repeated assurances, government officials heard from many concerned residents, including parents who wanted to keep their children from nearby schools.

Classes were canceled at many of those campuses Wednesday before news of the extinguished flames.

Officials said they do not yet know whether soil and water near the plant was contaminated by the volatile organic compounds that burned, but were conducting testing.

They also did not know the volume of burned chemicals or the cause of the fire.

"We are in the process of transitioning to a cleanup or recovery type stage," Richardson said.

"I couldn't give you an exact amount of time it will take us to do the cleanup. But it will go on for quite a while."