WASHINGTON (AFP) - The United States on Thursday (Aug 18) expressed shock at a photo circulating worldwide on social media that shows a dazed Syrian boy covered in blood and dust, calling him "the real face" of the country's war.

"That little boy has never had a day in his life where there hasn't been war, death, destruction, poverty in his own country," State Department spokesman John Kirby told reporters during his daily press briefing.

Departing from his usual diplomatic talking points, Kirby asked the reporters how many among them had seen photos of the child.

The shocked boy, a four-year-old named Omran, is pictured sitting in an ambulance covered in blood and dust after an air strike Wednesday in the rebel-held district of Qaterji in the southeast of Aleppo, which has been devastated by the five-year war.

"You don't have to be a dad, but I am. You can't but help look at that and see that that's the real face of what's going on in Syria," Kirby said.

Since the image's release, the photo has reverberated around the globe, much like that of three-year-old Aylan Kurdi, whose body washed ashore on a Turkish beach last year. 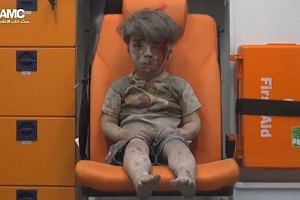 Kirby, whose boss John Kerry has for months attempted to forge a pathway with Russia to end the war, said Thursday that "we all have to pull together to try to reach a better outcome."

Kerry "continues to urge Russia to work with him on a set of proposals that we agreed to in Moscow and teams are still trying to work out, try to get the cessation of hostilities to be more enforceable across the wide expanse of Syria in an enduring way," Kirby said.

In July, Washington and Moscow reached an agreement to cooperate more closely in an attempt to salvage a failing truce and focus on battling the Islamic State in Iraq and Syria (ISIS) militants.

The American roadmap to end the war includes a national ceasefire, opening up of humanitarian aid, and the resumption of political negotiations between the Syrian regime and opposition in Geneva.

Under a cessation of hostilities, Kirby said, people would hopefully be spared "any more images like the one of that young boy today in Aleppo."