WASHINGTON (AFP) - US bombers are no longer conducting flights over South Korea after Seoul asked for such missions to be paused, a US general said on Monday (Nov 26).

"As we're going through the diplomatic aspect, we don't want to actually do something that's going to derail the diplomatic negotiations," Gen Brown said.

"So that's part of the reason why we're not doing (flights) over Korea."

As part of its so-called "Continuous Bomber Presence Mission", the US Air Force has kept B-1Bs, B-52s and B-2s on the US territory of Guam since 2004.

It routinely conducts flights over the region, often with partners including Japan, South Korea and Australia, as a way of training and exerting a strong military presence against North Korea and other potential adversaries.

Gen Brown said despite not flying over the Korean peninsula, the overall number of bomber flights has not changed.

The US and South Korea have scaled back or scrapped several joint military drills since a historic summit between North Korean leader Kim Jong Un and President Donald Trump in Singapore in June. 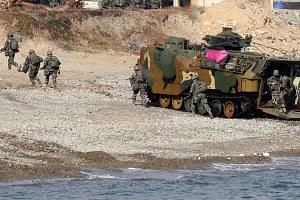 At the meeting, Mr Trump announced the US would stop holding joint exercises with the South, calling them expensive and "very provocative".

US Defence Secretary James Mattis last week said the US and South Korea are reducing the scope of "Foal Eagle", a joint drill scheduled for spring 2019.

Foal Eagle is the biggest of the regular joint exercises held by the allies, and has always infuriated Pyongyang, which condemned it as preparations for invasion.