UNITED NATIONS (REUTERS) - US Secretary of State Mike Pompeo warned members of the United Nations Security Council on Thursday (Sept 27) that they must "set the example" by enforcing sanctions on North Korea as China suggested the Council should consider easing the tough measures.

Pompeo chaired a meeting of the 15-member council on the sidelines of the annual UN gathering of world leaders after meeting with his North Korean counterpart Ri Yong-ho on Wednesday.

Pompeo plans to travel to Pyongyang next month (Oct) to meet with Kim.

But until Pyongyang gives up its nuclear weapons programme, Pompeo said: "Enforcement of Security Council sanctions must continue vigorously and without fail until we realise the fully, final, verified denuclearisation."

"The members of the council must set the example on that effort," he said, after US Ambassador to the United Nations Nikki Haley earlier this month accused Russia of cheating on UN sanctions on North Korea.

The Security Council has unanimously boosted sanctions since 2006 in a bid to choke off funding for Pyongyang's nuclear and ballistic missile programmes. 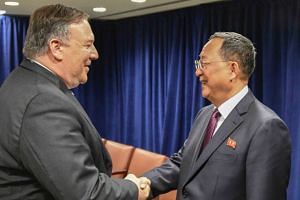 The Chinese government's top diplomat Wang Yi noted that there are provisions in Security Council resolutions for the body to modify sanctions if North Korea complies.

He said that "given the positive developments" China believed the Council "needs to consider invoking in due course this provision to encourage the DPRK and other relevant parties to move denuclearisation further ahead."

Russian Foreign Minister Sergei Lavrov backed his Chinese colleague. Lavrov said that “any negotiation is a two-way street. Steps by the DPRK towards gradual disarmament should be followed by the easing of sanctions.”

He was also critical of several US attempts to tighten UN sanctions on North Korea in recent months.  In July, Russia and China delayed a US push for the council’s sanctions committee to order a halt to refined petroleum exports to North Korea, asking for more detail on a US accusation that Pyongyang breached sanctions, diplomats said.

Then last month, Russia and China objected to a US proposal to add a Russian bank, a Moscow-based North Korean banker and two other entities to a UN Security Council blacklist, diplomats said.

“Further increase of sanctions goes beyond cutting off financing of banned missile and nuclear programmes, and is in fact a threat to North Korean citizens and would bring extreme socio-economic and humanitarian suffering,” Lavrov said.

Lavrov said the Security Council should send a clear signal in support of the positive momentum on the Korean Peninsula.

“This could be done, for example, by adopting a relevant resolution and we want to prepare a draft of such a resolution and propose it to the Security Council,” he said.

Sweden’s Foreign Minister Margot Wallstrom, speaking at the same meeting, agreed that the council should recognise that “recent progress has shown that is possible to diffuse tensions through dialogue and cooperation.”

Diplomats have said the United States did not want the Security Council to issue a statement on the developments.