US President Donald Trump said on Tuesday that the United States and China are close to a trade deal, but made clear that the prospect of tariffs was still on the table, and warned that the US would raise tariffs on China if no trade deal was reached.

His speech at the Economic Club of New York was closely watched by Wall Street, but offered no new details on any signing of a much-touted "Phase One" preliminary trade deal with China.

"We're the ones deciding whether or not we want to make a deal. We're close. A significant Phase One deal with China could happen, could happen soon," he said, but added that he would accept only a deal that was good for American workers and companies.

"If we don't make a deal, we're going to substantially raise those tariffs," he said. "That's going to be true for every other country that will mistreat us too, because we've been mistreated by so many countries."

Top White House economic adviser Larry Kudlow later told CNBC that he had no further details on the timing of the trade deal, saying: "I wouldn't put a timetable on it. Close means close."

Markets barely moved after Mr Trump's speech, which left trade watchers no clearer about how near the US and China were to a deal.

Former acting deputy US trade representative Wendy Cutler said that Mr Trump's comments that the two sides were close to a deal were encouraging, but disagreed that China was "dying for a deal".

Said Ms Cutler: "He casts this negotiation as one where the US has all the leverage, while China's economy is on a downward spiral. I suspect that China believes it has the upper hand in the talks given political developments in the US and the upcoming election."

She added: "These conflicting perceptions are undoubtedly complicating the ability of both sides to close the deal. Being close to a deal is no guarantee for a deal getting done."

We're the ones deciding whether or not we want to make a deal. We're close. A significant Phase One deal with China could happen, could happen soon. If we don't make a deal, we're going to substantially raise those tariffs.

U.S. PRESIDENT DONALD TRUMP, in his speech on Tuesday, offering no new details on a trade deal between the US and China.

Similar statements of senior US officials have bored people. It seems this US administration really believes a lie repeated a thousand times becomes truth. 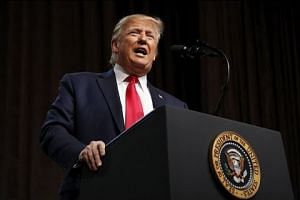 In an early indication of reactions from Beijing, Mr Hu Xijin, the editor-in-chief of the state-owned tabloid, Global Times, wrote on Twitter that Mr Trump's speech contained nothing new.

"Similar statements of senior US officials have bored people. It seems this US administration really believes a lie repeated a thousand times becomes truth," Mr Hu tweeted on Tuesday.

The easing of punitive tariffs has emerged as a point of contention, with China announcing last week that it had agreed with the US to cancel tariffs on each other's goods in phases, followed by Mr Trump's denial that he had so far agreed to roll back any tariffs.

Peterson Institute for International Economics senior fellow Gary Hufbauer said that one reason Mr Trump gave no details was that US Trade Representative Robert Lighthizer and Chinese Vice-Premier Liu He were still haggling over the terms of tariff reductions, including whether to postpone the upcoming Dec 15 tranche of tariffs on US$160 billion (S$218 billion) worth of Chinese imports.

He also took aim at the Federal Reserve's monetary policy decisions that have left US interest rates higher than many other economies and said he would prefer negative rates.

He said: "Remember we are actively competing with nations that openly cut interest rates so that many are now actually getting paid when they pay off their loan, known as negative interest. Who ever heard of such a thing?"

But farmers, many of whom helped Mr Trump swing states in the Midwest in the 2016 election, are not doing well given the low prices of commodities such as corn, cotton and soya beans.

Dr Hufbauer said the US is also pushing China to commit to large purchases of agricultural goods at a defined time, which would lift the prices of these commodities.

"Farmers are really hurting," he said. "An uplift in prices is what they're looking for, and they want it right now. They certainly want it before the 2020 election."

A version of this article appeared in the print edition of The Straits Times on November 14, 2019, with the headline 'US and China close to reaching a trade deal, says Trump'. Subscribe
Topics:
More
Whatsapp Linkedin FB Messenger Telegram Reddit WeChat Pinterest Print Purchase Article Copy permalink