WASHINGTON (NYTIMES) - Sexual assaults at three United States military academies rose sharply over the last two years, according to a Pentagon study released on Thursday (Jan 31), an increase that defied efforts to address a problem that has long plagued the military.

An anonymous Defence Department survey found that the number of unreported sexual assaults surged by nearly 50 per cent - to 747 during the 2017-18 academic year, compared with 507 in 2015-16.

The Pentagon is required by Congress to conduct the survey every two years at the US Military Academy at West Point, the US Naval Academy and the US Air Force Academy.

Among reported cases of unwanted sexual contact, which runs the gamut from groping to rape, the number rose only slightly. The study reported 117 episodes during the 2017-18 academic year, up from 112 the year before.

"We are disheartened that the strategies we have employed have not achieved the results we had intended," said Ms Elizabeth Van Winkle, executive director of one of the Pentagon offices that looks into sexual assault.

The report rekindles attention on a problem that has poisoned the military as more women join the armed services. The increase in sexual assaults, as reported by the service academies, is similar to what is happening in the military as a whole, and comes at the same time.

The difference between the officially reported cases and the numbers that surfaced as a result of the anonymous survey is an explicit acknowledgment that many young men and women who are assaulted at military academies still remain silent about the crime. 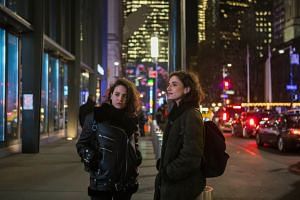 Too soon for a #MeToo comeback?

Despite efforts by the academies to encourage students to report assaults, the study shows that the years-long problem apparently is not going away.

Defence Department officials blamed a culture at the academies of playing down sexual assault, which they said encouraged students to feel that they should not report the violations. Former Defence Secretary James Mattis had ordered academy leaders to focus on programmes emphasising responsible alcohol consumption and the reporting of sexual assault episodes.

"Our cadets and midshipmen must be role models if they're to lead the world's finest fighting force," Mr James Stewart, who is performing the duties of undersecretary of defence for personnel and readiness, said in a statement.

"This year's report demonstrates that there is more work to be done to meet this goal."

For the first time, the survey asked about alcohol use. It found that close to one-third of male students and 15 per cent of female students said they drank heavily.

The latest report comes two years after the Marine Corps was rocked by disclosures that an all-male, invitation-only group on Facebook called Marines United shared thousands of nude and other private photos of female Marines.

The continued increase of the numbers, despite adverse publicity in recent years, drew a sharp rebuke that the Pentagon was not taking the issue seriously.

Senator Kirsten Gillibrand said the unreported cases were "a clear sign" that sexual assault victims did not "feel confident in the military's ability to adjudicate and prosecute these crimes without retaliation".

"The answer to this scourge can't be the same answer we get every year of 'give us more time'," Ms Gillibrand, a member of the Armed Services Committee, said in a statement.

"We must stand up for survivors and fight sexual assault in the military with everything that we have."