At the request of the United States, the council held urgent closed-door consultations after North Korea's unsuccessful launch on Thursday (April 28) of two medium-range missiles, as fears grew that the secretive country was preparing to conduct a fifth nuclear test.

North Korea has now made three bids in two weeks to test-fly a Musudan missile, which is capable of striking US bases on the Pacific island of Guam.

"We are looking at a response," China's Ambassador Liu Jieyi, who holds the Security Council presidency this month, told reporters. 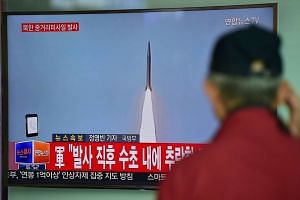 The 15-member council was unanimous in condemning the latest launches, Mr Yoshikawa said.

Current UN resolutions bar North Korea from developing any ballistic missile-related technology, and South Korea said it would push for fresh penalties to be slapped on Pyongyang.

Diplomats said they expected the council to issue a statement on Friday after the Chinese delegation requested time to consult with officials in Beijing.

Chinese President Xi Jinping on Thursday underscored Beijing's commitment to enforcing existing UN sanctions on North Korea and to preventing any instability on its doorstep.

"As a close neighbor, we will never allow war or chaos on the (Korean) peninsula," he told a meeting of regional foreign ministers in Beijing.

South Korea said a first launch on Thursday of what was understood to be a Musudan missile saw the rocket plunge back to earth seconds after take-off.

A second attempt in the evening - again of a Musudan - also appeared to have failed, a defense ministry official said.

An initial effort on April 15 - the birthday of late founding leader Kim Il Sung - ended in what the Pentagon described as "fiery, catastrophic" failure, with the missile apparently exploding just after take-off.

South Korean military officials say the North is desperate to register a successful launch ahead of next week's ruling party congress, at which leader Kim Jong Un is expected to take credit for pushing the country's nuclear program to new heights.

In recent months, the North has claimed a series of major technical breakthroughs in developing what it sees as the ultimate goal of its nuclear drive - an intercontinental ballistic missile capable of delivering a nuclear warhead to targets across the continental United States.

The achievements trumpeted by Pyongyang have included miniaturising a nuclear warhead to fit on a missile, developing a warhead that can withstand atmospheric re-entry and building a solid-fuel missile engine.

Last Saturday, it successfully tested a submarine-launched ballistic missile - a move that was promptly condemned by the Security Council.

The Musudan is believed to have an estimated range of anywhere between 2,500 and 4,000 km.

The missile has never been successfully flight-tested.

US President Barack Obama recently warned that North Korea is making dangerous progress, even when its efforts fall short of outright success.

"Although more often than not they fail in many of these tests, they gain knowledge each time," Obama said.

Anxiety has been high since Pyongyang conducted its fourth nuclear test in January and a rocket launch a month later that was widely seen as a disguised ballistic missile test.

The council responded with its toughest sanctions to date, angering the North, which has since made repeated threats of attacks targeting Seoul and Washington.

South Korea and the United States began wrapping up on Friday their annual "Foal Eagle" military exercise, which was beefed up this year in response to the January nuclear test.

North Korea regularly condemns the large-scale joint drills, which it insists are provocative rehearsals for invasion.