NEBRASKA (WASHINGTON POST) - Across the Midwest, the "historic" flooding that has killed at least two people and prompted leaders to declare states of emergency continued through the weekend, forcing more residents to flee their homes.

The surging water, fuelled by a powerful winter storm, overwhelmed infrastructure, threatened a nuclear power plant and cut off access to some towns and cities.

In Nebraska, which has seen some of the most significant damage, Governor Pete Ricketts said the effects of the "devastating flooding... could last for quite some time".

On Sunday (March 17), state officials confirmed two flood-related deaths and said another two men have been missing for days.

News of the fatalities came as residents in neighboring Iowa were driven from their homes as the Missouri River breached and broke levees. In the south-west corner of the state, the river rose to just over 9m, well beyond the previous record, the Associated Press reported.

"It's flowing fast, and it's open country - there's nothing there to slow it down," Mr Mike Crecelius, director of emergency management in Fremont County, Iowa, told the AP.

Mr James Wilke, a 50-year-old Columbus, Nebraska, farmer, was killed last Thursday when a bridge collapsed as he used a tractor to try to reach stranded drivers, the AP reported. The next day, Mr Aleido Rojas Galan, a 52-year-old resident of Norfolk, Nebraska, was swept away in floodwaters in south-western Iowa.

The National Weather Service warned that parts of Minnesota, Wisconsin and South Dakota - along as well as Nebraska and Iowa - could still face flooding this week. 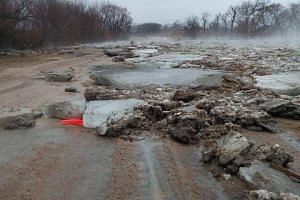 A "bomb cyclone" - a hurricane-like winter storm - battered the region with strong winds and heavy rainfall. The resulting flooding was particularly intense because the heavy rain fell on snow that had not melted yet, said Mr Brian Barjenbruch, the science and operations officer for the Weather Service in Omaha.

"And the ground was completely frozen," he said in an interview. "It's almost like all of this rain was falling, melting snow and every last drop had to run off."

Mr Barjenbruch said the results have been incredibly damaging in parts of eastern Nebraska and western Iowa.

"It is some of the worst flooding that we've seen in many years," he said of those areas.

"In some locations, it's the worst flooding on record on many of these river gauges."

Even the forecasters themselves were not immune: The National Weather Service in Omaha reported last Friday that it had to evacuate its offices because of rising waters.

Along with Mr Ricketts, governors in Wisconsin and South Dakota declared emergencies, while Iowa's governor issued a wave of disaster proclamations.

South Dakota Governor Kristi Noem said she signed an emergency declaration to free up more state money for people affected by the storm and the flooding. "The storms this week have been extremely difficult for many of our communities," she said in a statement.

"This has been a statewide emergency with people impacted by heavy snow, high winds, rain, and freezing rain."

In his emergency declaration, Wisconsin Governor Tony Evers said the storm had "moved across the entire state of Wisconsin" between last Wednesday and Friday. In its wake, he said, water was "rising swiftly".

"The warm temperatures and rain the last few days have caused much of the heavy snowpack and ice to melt resulting in flooding, ice jams, and rivers and creeks to rise," he said in a statement.

In Nebraska, more than 650 residents rushed to shelters while state troopers fanned out for water rescues, officials said.

"Nebraska has experienced historic flooding and extreme weather in nearly every region of the state," Mr Ricketts posted in a statement on Twitter. He issued a disaster declaration last Tuesday.

President Donald Trump said last Friday afternoon that he spoke to Mr Ricketts about the situation.

"The people of Nebraska & across the Midwest, especially the Farmers & Ranchers, are feeling the impacts from severe weather," he tweeted.

The flooding closed off main routes through parts of the region, said Ms Jennifer Arthur, 44, a bartender at Jack's Place in Omaha.

Ms Arthur said that Jack's had additional customers because the water had closed some other bars and restaurants - and the flooding was the main topic of conversation.

"There's a lot of people impacted that had to get out real fast," she said. "A lot of people are going to friends' houses, hotels."

The Cooper Nuclear Station, a power plant that sits along the swelling Missouri River in south-east Nebraska, may also be forced to close down if the water continues to rise, the facility's officials said.

Employees are piling sandbags along the levee that protects the plant and around the building's doorways, the Omaha World-Herald reported. Officials said a shutdown won't harm the nuclear reactor.

But flooding has already caused severe damage in some other areas, tearing apart pieces of roadways and bridges, the authorities said.

"The power of water is really quite impressive," said Mr Barjenbruch.

"When that water moves out of the channel it is normally in, it interacts with roads, bridges in ways it doesn't normally. When that happens... we have roads fail, bridges fail, we've even had dams fail in far north-eastern Nebraska."

He added: "The power of water should never be underestimated."

Forecasters have also warned that, because of significant precipitation during winter and because of what The Washington Post's Capital Weather Gang called "an active spring storm track through the nation's midsection", this flooding in the Midwest may be only the start of a painful flood season.