LOS ANGELES (AFP) - What President-elect Donald Trump calls home is a cavernous building in midtown Manhattan which is decked out with marble floors, goldleaf furniture and finishes, crystal chandeliers and Greek columns.

In a rare inside look into the billionaire real estate magnate's opulent Trump Tower, which has panoramic views of the Big Apple and Central Park, he chats with celebrity entertainment news outlet TMZ founder Harvey Levin about his family, his passion for sports and his success.

"I wanted to make motion pictures," Trump says in the interview which was shot in September, as he shows off objects like a family photo, his youngest son Barron's electrical car or his spinning chair from TV show The Apprentice.

Since his election, Trump has only given one interview, to CBS's 60 Minutes.

"Your home is a little like bit like Versailles," Levin remarks at one point, referring to the stunning palace outside Paris built by France's Louis XIV.

But Trump's tower is of a gawdy opulence of a different sort than the stately chateau and its expansive gardens that French kings once called home.

In the program, he said that if elected, he wouldn't change the decor in the White House - where he is due to take office on January 20. 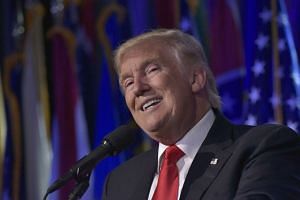 "Nothing would change in the White House. The White House will remain the way it is." Trump's brother Fred died of alcoholism, leading him to swear off alcohol out of fear of becoming an addict himself.

"I've never had a drink because of my brother," says Trump, who has banned not just alcohol but also drugs and cigarettes for his children.

"I've been very tough on my children with respect to that ."

Speaking of his late father, Trumps says he "was very proud of me, of the success I had." As for his wife Melania - his third - Trump praises her as a "great mother."

"She's very traditional. She'd rather stay at home than, you know, anything else," he adds.

Although his desk is covered in piles of magazines with pictures of himself on the cover, the president-elect denies being driven by ego.

"Above all, I want to make life good for a lot of people, not just myself," he says.

"I've won so much. I've won enough for myself.

"I want to win for the country now. I hate seeing, Harvey, what's happening to our country."