WASHINGTON • US President Donald Trump has proposed sharp cuts in individual and business income tax rates and a radical reordering of the tax code that would significantly benefit the wealthy, as he rushed to show progress before the symbolic 100-day mark of his presidency tomorrow.

The "phenomenal" tax plan that he promised 11 weeks ago, however, consisted of a one-page list of bullet points and offered no explanation of how the plan would be financed.

The Republican President is seeking to follow through on a flagship promise to reform the tax code to boost the economy, businesses and families, including middle-class and working-class Americans.

"Under the Trump plan, we will have a massive tax cut for businesses and massive tax reform and simplification," Treasury Secretary Steven Mnuchin announced from the White House on Wednesday.

The signature reform would be a dramatic reduction in the corporate tax rate, from the current 35 per cent to 15 per cent. 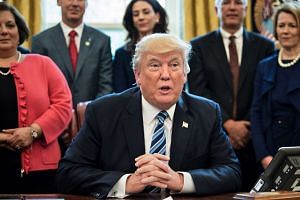 Tax brackets for individuals would be compressed from seven to three - 10 per cent, 25 per cent and 35 per cent, lower than the current top rate of 39.6 per cent.

"It's a great plan," Mr Trump said on Wednesday. "It's going to put people back to work."

The plan also eliminates estate tax, a levy on property including cash and real estate transferred from the deceased to their heirs. But as it limits most deductions, this could expose more of an average US household's income to taxes.

Mr Gary Cohn, the President's chief economic adviser, who unveiled the plan along with Mr Mnuchin, dubbed it "the most significant tax reform legislation since 1986, and one of the biggest tax cuts in American history".

The goal, the White House said, is for the reforms to spur the US economy to 3 per cent annual growth.

But the long-anticipated overhaul - details of which remained unclear - could face stiff opposition in Congress, including from some Republicans, with lawmakers sharply divided over the prospect of fuelling already rising deficits.

"This isn't going to be easy. Doing big things never is," Mr Cohn admitted. Mr Mnuchin declined to set a deadline for the reform passing Congress, but said the administration aimed to "get this done this year".

A key element is a one-time tax on overseas profits, which Mr Mnuchin said will "bring back trillions of dollars that are offshore" to the United States for investment. That rate has yet to be finalised.

"The only result of this plan will be a steep increase in our country's deficit while leaving working- and middle-class families in the dust," House Democrat Gwen Moore fumed in a statement.

Analysts have said that cutting the top marginal corporate tax rate by 20 percentage points could add US$2 trillion (S$2.8 trillion) or more to the US deficit over a decade.

But he noted that a company's choice of location is influenced by many factors, including proximity to its key markets, access to resources and the overall attractiveness of the business environment.

CIMB economist Song Seng Wun agreed, saying that short of Asia falling into a financial crisis, US firms will likely retain their Singapore operations and are unlikely to repatriate massive sums back to the home country.

"If the US corporates repatriate money back to the US, they have to ask themselves what they will do with the money there. If the rest of the world, particularly Asia, is still growing, then it would make sense to keep investing in the region."