WASHINGTON (WASHINGTON POST) - Even before his nomination has been publicly confirmed, Mr David Malpass, President Donald Trump's pick to run the World Bank, faces mounting attacks on his competence and support for the bank's mission.

Mr Malpass, undersecretary of the treasury for international affairs, is an outspoken critic of the bank and its sister organisation, the International Monetary Fund. The president plans to nominate the former Wall Street economist to head the bank, a pillar of the global order that Mr Trump opposes, as soon as Wednesday (Feb 6).

The appointment will likely trigger another clash between Mr Trump's "America First" views and the decades-old consensus over management of the global economy. Since 1944, when international financial institutions were created near the end of World War II, the US has selected the bank's president while European countries have controlled the top IMF job.

"Malpass has never distinguished himself with an interest in the mission of the World Bank," said Mr Tony Fratto, former White House and Treasury Department spokesman in the George W. Bush administration. "It's an odd career-capping type of appointment for someone with very little demonstrated interest in these topics. It's hard to see how he can be deemed qualified for this job."

Mr Malpass, 62, has been openly critical of both the World Bank and IMF, saying there was "a lot of room for improvement" in the bank's lending programmes and calling for changes to better focus its operations. White House press secretary Sarah Sanders told reporters on Tuesday that Mr Malpass would be "a great choice" if Mr Trump formally nominates him.

"Globalism and multilateralism have gone substantially too far, to the point that they are hurting US and global growth," Mr Malpass told a House subcommittee in late 2017.

Still, last year he supported a US$13 billion (S$17.6 billion) capital increase for the bank, its first in eight years, which was packaged with reforms to internal operations and spending practices. 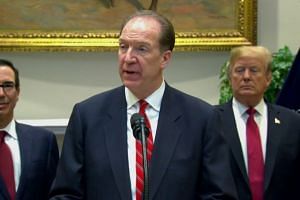 If confirmed to run the bank, Mr Malpass would seek to reduce lending to middle-income countries such as China and India, which he has said enjoy ready access to private capital markets.

In its most recent fiscal year, the bank doled out nearly US$67 billion in financing, investments and guarantees, according to its annual report.

As word of the Malpass appointment leaked in recent days, it drew fire from bank allies. Mr Malpass lacks the high profile of some former bank presidents, such as Robert McNamara, former defence secretary; Sir James Wolfensohn, a globe-trotting banker and investor; and, Mr Robert Zoellick, who had served as deputy secretary of state and chief US trade negotiator.

"Trump poses a unique threat to the international system. He's nominating somebody, not just of dubious qualifications, but somebody who is committed to undermining the multilateral mission of the bank," said Mr Justin Sandefur, a senior fellow at the Center for Global Development.

Mr Malpass worked on Wall Street as chief economist to Bear Stearns, the investment bank that collapsed amid the financial crisis in March 2008. Seven months earlier, even as some of the bank's own hedge funds were failing, he authored a remarkably sunny Wall Street Journal opinion article that played down the danger of an economic downturn.

"Housing and debt markets are not that big a part of the US economy, or of job creation. It's more likely the economy is sturdy and will grow solidly in coming months, and perhaps years," Mr Malpass concluded.

Little more than a year later, the economy toppled into the worst recession since the 1930s.

After Bear Stearns failed, Mr Malpass unsuccessfully sought the 2010 Republican nomination to run for the US Senate. In 2016, he joined the Trump campaign as an economic adviser.

At Treasury, he has been a fierce critic of the increasing role of the state in China's economy and has participated in ongoing trade talks with Beijing. But he was forced into an embarrassing reversal one year ago after saying wrongly that the administration had "discontinued" an economic dialogue with Beijing.

Mr Malpass was forced to backtrack as the Treasury Department disavowed his comments.

The bank's board of executive directors ultimately determine the next president. The US controls almost 16 per cent of the votes, nearly four times China's share, while European countries have more than one-quarter. "I think the Europeans will push back a bit," said one former US Treasury official, who asked for anonymity to discuss diplomatic conversations. "In the end, they'll probably swallow it."