WASHINGTON (BLOOMBERG) - US President Donald Trump took the biggest gamble of his presidency on Thursday (March 8), breaking decades of US diplomatic orthodoxy by accepting an invitation to meet with North Korean leader Kim Jong Un.

The bet is that Mr Trump's campaign to apply maximum economic pressure on Mr Kim's regime has forced him to consider what was previously unthinkable: surrendering the illicit nuclear weapons programme begun by his father.

If the president is right, the US would avert what appeared at times last year (2017) to be a steady march towards a second Korean War.

It was classic Trump, showing an unerring confidence to get the better end of any negotiation. But it was also Trump in another way: high risk and high reward, with little regard for those in the foreign policy establishment who worry that it is too much, too soon.

"He's taking a risk," said Mr Patrick Cronin, senior director of the Asia-Pacific Security Program at the Centre for a New American Security.

"By seizing an opportunity for a summit meeting, a decision that would have taken much more time in another administration, the president has said, 'I'm going to go right now. And we're going to test this'."

There is no protocol for Mr Trump to follow or guidebook for him to fall back on: he would be the first US president ever to meet with a North Korean leader.

Regardless of how it turns out, the stunning decision by Mr Trump hands Mr Kim a prize long sought by the regime's ruling dynasty: the legitimacy conferred by a historic meeting with the sitting president.

So much could go wrong. 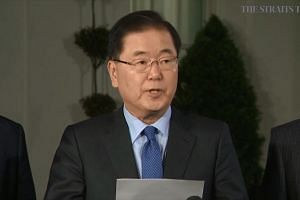 Mr Kim's proposal may be a ruse to buy time for North Korea's weapons programme to develop further and to undermine sanctions. The summit might collapse, leaving the US president looking hapless and escalating military tensions on the Korean peninsula.

It is a startling turnabout for two leaders who have spent the past year trading personal insults.

And the announcement came on a day when Mr Trump had already toppled a pillar of US policy dogma, breaking the long-standing commitment to freer trade by imposing stiff tariffs on steel and aluminium imports.

Mr Trump and his team recognise the possibility that Mr Kim's outreach is not in good faith or is some sort of ploy, an administration official said. But the US president's advisers believe that if the US continues to exert maximum pressure on the North Korean regime as the summit approaches, Mr Kim may be forced to make real concessions even if he enters talks thinking he can avoid them.

The president stressed that Mr Kim would gain no immediate relief in a Twitter post shortly after the meeting was announced. "Great progress being made but sanctions will remain until an agreement is reached," Mr Trump wrote.

Even the technical hurdles to reach an agreement are immense, eclipsing the challenges president Barack Obama faced in making a deal with Iran on its nuclear programme, said Ms Alexandra Bell, senior policy director at the Centre for Arms Control and Non-Proliferation in Washington.

"It's the Iran deal times 100 because they already have a workable nuclear weapons programme with the rudimentary ability to deliver those weapons," said Ms Bell, who served in the Office of the Under Secretary for Arms Control and International Security at the State Department under former president Obama.

While the Kim regime has been "all talk and no action", Senator Lindsey Graham said in a statement.

"I do believe that North Korea now believes President Trump will use military force if he has to," she said.

"A word of warning to North Korean (leader) Kim Jong Un - the worst possible thing you can do is meet with President Trump and try to play him," Senator Graham added. "If you do that, it will be the end of you - and your regime."

House Foreign Affairs Committee chairman Ed Royce said the talks were evidence the sanctions applied by the administration "are starting to work" while warning that North Korea had "repeatedly used talks and empty promises to extract concessions and buy time".

"Expectations should be low and history demonstrates that scepticism and careful diplomatic work are necessary, but it is better to be talking about peace than recklessly ramping up for a war," he said on Twitter.

Mr Adam Mount, a senior fellow at the Federation of American Scientists, said that while the talks would extend the period of relative warmth that began during the Olympics, denuclearisation remained "extremely unlikely".

Nuclear weapons are fundamental to the Kim family's grip on power at home.

He also cautioned that the meeting was "a massive coup" for a regime that "wants to be seen as a regular nuclear power".

It could lend Mr Kim insights into how the US and South Korea coordinate, and the regime could test Mr Trump by asking for exorbitant terms in exchange for denuclearisation.

"I do worry about a president who has no foreign policy experience getting out-manoeuvred," he said. "I don't trust Donald Trump alone in a room with Kim Jong Un."