It was Bannon's first television interview since leaving the White House and returning as executive chairman of Breitbart News, the conservative website he previously led.

He blamed them for failing to repeal and replace former president Barack Obama's signature healthcare law and made clear he would use his Breitbart perch to hold Republicans accountable for not helping Trump push through his agenda.

"They're not going to help you unless they're put on notice," he told CBS's Charlie Rose. "They're going to be held accountable if they do not support the president of the United States. Right now there's no accountability."

Stressing absolute loyalty to Trump, Bannon criticised members of the administration who, he said, had leaked to the media their displeasure with the way Trump handled the white-supremacist-fuelled violence in Charlottesville, Virginia, which left one dead and more injured.

He explicitly mentioned Cohn, Trump's director of the National Economic Council who had criticised Trump's response in an interview with the Financial Times, and said he "absolutely" thought Cohn should have resigned.

Bannon joined the Trump campaign in August 2016 and emerged as the president's ideological ID, channelling his populist and nationalist impulses. Though he made many enemies within the West Wing, including the president's son-in-law and senior adviser Jared Kushner, and clashed with John Kelly, Trump's second chief of staff, Bannon remains close to Trump.

Recalling a particularly low moment in the campaign, when the "Access Hollywood" tape emerged of Trump bragging about groping women, Bannon dismissed it as "just locker room talk" - but said the moment served as an important "litmus test" for loyalty to Trump.

At the time, Reince Priebus, Trump's first chief of staff, urged the then-candidate to either drop out of the race or face a historic loss. And, Bannon said, Chris Christie, who served as a campaign adviser overseeing Trump's transition plan, lost a likely spot in the president's Cabinet because of his response to the video.

On China, Bannon reiterated his calls for the United States to take a tougher stance over trade and appropriating US technology. 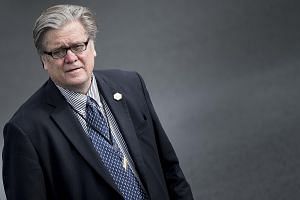 "Donald Trump, for 30 years, has singled out China as the biggest single problem we have on the world stage," he said. 'The elites in this country have got us in a situation. We're at not economic war with China; China is at economic war with us."

And he also seemed to criticise the president's recent decision to rescind protections for "Dreamers" - those 690,000 undocumented immigrants brought to the country as young children - while giving Congress six months to devise a legislative solution.

The move, he said, could cost Republicans the House in the 2018 election.

"If this goes all the way down to its logical conclusion, in February and March, it will be a civil war inside the Republican Party that will be every bit as vitriolic as 2013," Bannon said.

"And to me, doing that in the springboard of primary season for 2018 is extremely unwise."