CHICAGO (BLOOMBERG) - Traders that lived through the 1980s US farm crisis have a good reason to be sceptical of President Donald Trump's new plan to help growers.

That's because they question whether the US would really be able to ship all of the US$15 billion (S$20.4 billion) in potential federal farm-good purchases as humanitarian aid to poor countries. Instead, they suspect the government will end up stockpiling. Keeping reserves in the country won't solve the current overhang and, if history is any guide, the pile will just keep on growing.

The US government bought supplies from farmers in the 1980s after Jimmy Carter's ban on grain exports to the Soviet Union sent prices tumbling. The purchases were through the Commodity Credit Corporation - an entity established in 1933 to stabilise, support and protect farm income as well as prices. Corn and wheat stockpiles wound up climbing to a record in the mid-80s.

"Through executive order, Trump can buy the US$15 billion through the Commodity Credit Corporation and then hold it for donation or long-term storage," said Dan Basse, president of Chicago-based consultants AgResource Co. "I honestly see many pitfalls of all of this as it is a step backwards."

American farmers are struggling to keep afloat as the tariff spat that started a year ago curbed soybean exports to top buyer China, sending prices tumbling and hurting grower incomes. A gauge of returns from grain futures is trading near its lowest since 1977 and farmer bankruptcies in six Midwest states rose 30 per cent in 2018, according to the Federal Reserve Bank of Minneapolis.

Trump raised tariffs on US$200 billion worth of Chinese goods on Friday, a move that the Asian nation vowed to retaliate against and US farmer groups decried. Seeking to appease his rural voter base, Trump tweeted that the government would use money from the tariffs to buy American agricultural products "in larger amounts than China ever did" and send it to "poor & starving countries" for humanitarian aid.

Traders remained sceptical. In the 1980s, crops expanded just as the export ban caused Soviet Union countries to start buying grain elsewhere. At the time, growers could deliver supplies to the Commodity Credit Corporation below certain loan rates. It wasn't until 1985 that the government cut that rate and stockpiles then started to fall, said Pat Westhoff, director of the Food and Agricultural Policy Research Institute of the University of Missouri in Columbia. 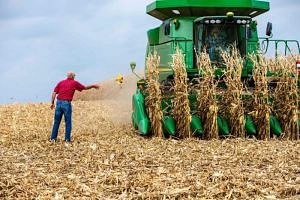 Frustration mounts among US farmers as China trade talks break down

The purchases aren't a "very effective" way to deal with overhang, "and that's what the government eventually realised", said Arlan Suderman, chief commodities economist at brokerage INTL FCStone Inc. "It does help support cash prices, but it limits rallies in the market because the market knows if it rallies too much, there are all those bushels still in the bin that will come out."

Food Grade Aid programs are also too small. The US government's Food for Peace program usually buys and ships about US$1.5 billion worth of goods a year to other countries. On top of that, the nations in need are usually seeking food-grade commodities, such as rice and wheat, said Joseph Glauber, former chief economist at the US Department of Agriculture. The vast majority of US corn and soy production is for use in animal feed or biofuels.

"Bangladesh does not want raw US soybeans - they want wheat, or wheat flour, milk powder and such," Basse said.

Trump's move could also generate disputes in the World Trade Organization as the measures can be seen as market distorting. The aid could send prices lower, hurting countries like Brazil and Argentina, which are also major corn and soybean exporters.

"You can't just dump grain at concessional prices," Glauber said. "That would constitute an export subsidy. That is something the WTO members agreed not to do."