Mr Trump demolished his rivals Ted Cruz and John Kasich in Connecticut, Delaware, Maryland, Pennsylvania and Rhode Island – a stunning show of force by a candidate seen as a populist political saviour by millions despite being loathed by the party establishment.

“I consider myself the presumptive nominee,” the real estate mogul told a crowd at Trump Tower in New York, despite still being short of the 1,237 delegates required to win the nomination outright.

On the Democratic side, Mrs Clinton won four contests including the night’s big prize, the battleground state of Pennsylvania.

But her clean sweep was denied by Mr Sanders, who won Rhode Island.

“What a great night,” Mrs Clinton told a thrilled crowd of supporters in Philadelphia, Pennsylvania.

The 68-year-old former secretary of state telegraphed her eagerness to shift toward the November general election and a showdown with Republicans.

“Let’s go forward, let’s win the nomination, and in July let’s return as a unified party,” she said. 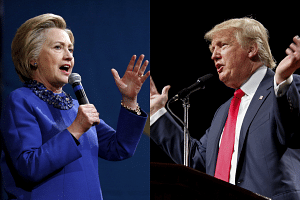 Mr Trump’s night was nothing short of huge, as he cleared 50 per cent support in all five states, with nearly all precincts reporting. In Rhode Island, he earned 64 per cent, trouncing Mr Kasich (24 per cent) and Mr Cruz (10 per cent).

Most importantly, the bombastic 69-year-old extended his lead in the all-important race for delegates who will officially choose the Republican nominee at the party’s convention in July.

Mr Trump’s triumph comes in the heated aftermath of the revelation that Mr Cruz and Mr Kasich, desperate to prevent the front runner from securing the nomination, were teaming up to block him in future races.

Mr Kasich agreed to forego campaigning in Indiana, a winner-take-all state that votes on May 3 and is the next focus in the GOP race. Mr Cruz will return the favour later in New Mexico and Oregon.

But Mr Trump slammed the alliance as “pathetic” and ineffective.

“This joke of a deal is falling apart, not being honoured and almost dead,” Mr Trump said on Twitter. “Very dumb!” Mrs Clinton’s strong Tuesday showing heaps pressure on the well-funded Mr Sanders, a self-declared democratic socialist senator from Vermont, even as he has vowed to fight on until the California primary on June 7.

“Almost every national poll and every state poll has us defeating Trump and that margin for us is significantly larger than Madam Secretary Clinton,” Mr Sanders told supporters in West Virginia, which votes on May 10.

Mr Trump was riding high following the latest contests, declaring that his rivals had “zero” chance of winning the 1,237 delegates necessary to earn the nomination ahead of the convention.

He now stands at 945 delegates, according to CNN’s running estimate. Mr Cruz was a distant second with 563, while Mr Kasich increased his numbers only slightly, to 152.

But the convoluted system of delegate allocation in some states means Mr Trump is still a considerable way from reaching 1,237.

Out of Pennsylvania’s 71 delegates, only 17 are pledged to the winner Trump. The remaining 54 are essentially wild cards, heading unpledged to the convention where they are free to vote as they see fit.

Mr Cruz, speaking on Tuesday in Indiana, sounded eager to move on to what he called “more favourable terrain.”

But according to a recent CBS poll,  Mr Trump leads in The Hoosier State with 40 per cent of likely Republican voters, with Mr Cruz five points back.

“If Trump takes Indiana, it’s very, very difficult to see how they can stop him,” Mr Morone said.

If he falls short of outright victory, Mr Trump runs the risk that his delegates, most of whom are bound to vote for him in only the first round, will desert him in subsequent rounds.

Mr Cruz and Mr Kasich have openly said they are counting on a contested convention, where they have a shot at wooing enough delegates to snatch the nomination.

Mr Trump recently faced criticism when a top aide revealed the candidate was preparing to reshape his image, but Mr Trump insisted he was not undergoing a makeover.

“If you have a football team and you are winning and then you get to the Super Bowl, you don’t change your quarterback,” Mr Trump said. “So I’m not changing.”

He also offered a preview of what a Trump-Clinton matchup would look like, saying she would play the “woman’s card” during the general election.

“She has nothing else going. Frankly, if Hillary Clinton were a man, I don’t think she would get five per cent of the vote.”