WASHINGTON (BLOOMBERG) - US President Donald Trump doesn't take kindly to his Twitter critics, and like many users of the social network he's used the block function to prevent them from engaging with him.

But for much of the past year, Mr Trump has been constrained by a federal judge's ruling that he couldn't block users because his account is a public forum.

On Tuesday (March 26), lawyers for the president will urge an appeals court in Manhattan to overturn that ruling, arguing that the account belongs to him personally and isn't controlled by the government.

The case is likely to help further clarify how government officials will be able to communicate on social media as the networks become further ingrained in daily life.

While US District Judge Naomi Reice Buchwald's ruling in May isn't the only one to find that a public official can't block critics on the networks, it's the first to apply to the president's feed.

"It's a hugely significant case in terms of how government officials can use social media platforms such as Facebook and Twitter and whom they can permissibly block from following them," said Mr Clay Calvert, director of the Marion B Brechner First Amendment Project at the University of Florida.

"Government officials can still have private accounts without triggering First Amendment concerns if they use those accounts only for non-governmental purposes," he added.

"But when it's Trump and he uses Twitter on a daily and nightly basis to comment on government issues and to criticise politicians, then that is where the First Amendment comes into play."

Mr Trump has wielded Twitter as a cudgel since he joined a decade ago - attacking his critics, blasting news coverage of his administration and offering a constant, running stream of commentary on issues from border security to Special Counsel Robert Mueller's investigation of Russian interference in the election.

He has 59.2 million followers. 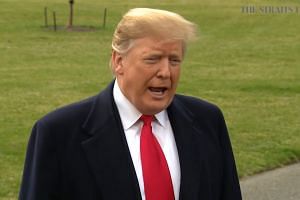 Just last week, he waged a war of tweets with Mr George Conway, a Republican lawyer who's married to Mr Trump's senior adviser Kellyanne Conway and has been a fierce critic of the president.

The Knight First Amendment Institute at Columbia University sued Mr Trump and White House Social Media Director Dan Scavino on behalf of seven users who were blocked by the president after they criticised him and his policies - including Ms Rebecca Buckhalter, a writer and political consultant, University of Maryland sociology professor Philip Cohen and political organiser and songwriter Holly Figueroa.

The institute, which works to protect free speech, claims the users' First Amendment rights were violated by the president's action.

Mr Trump uses Twitter "not to provide a platform for public discussion, but to disseminate his own views to the world," the president's lawyers argued in a brief to the appeals court.

"When he blocks a particular user from reading or replying to his tweets, he is exercising his right to choose with whom he will engage in speech. Nothing in the First Amendment divests him of that prerogative or compels him to receive messages that he does not wish to hear."

Mr Sean Spicer said in June 2017, while he was White House spokesman, that Mr Trump's tweets should be considered official statements.

Ms Buchwald ruled that blocking users prevented them from interacting with others who replied to Mr Trump's tweets - limiting their right to speak freely. While the judge declined to order the president to take action, saying her decision should be enough, Mr Trump unblocked the seven users and dozens of others after the ruling.

The case gives the appeals court the chance to show government officials that their decision to use social media, including Twitter, Facebook and Instagram, has consequences, said Professor Helen Norton,from the University of Colorado Law School, who is part of a group of First Amendment scholars supporting the plaintiffs in the suit.

"Government speakers need not choose to speak through platforms that permit public interaction - for example, they can have blogs or websites without enabling comment threads," Prof Norton said.

"When government officials speak to the public about the government's work through platforms that permit public interaction, they enable a forum for public comment, and the First Amendment permits them to control the content of their own posts but forbids them from controlling private parties' participation."

The notion that the Constitution allows the government to control its own speech, but not that of others, is longstanding, Prof Norton said. She cited the example of a city council meeting where the panel allows for public comment. It can't stop people from expressing opposing views to those of council members.

"It's not hard for governments to comply with this principle, and they've done so for a long time," Prof Norton said. "The interesting wrinkles in this case are that it involves the president, and newer expressive technologies."

Groups including the Electronic Frontier Foundation and the Georgetown Law Institute for Constitutional Advocacy and Protection support the plaintiffs.

The Coolidge-Reagan Foundation, a conservative free-speech advocate, said Ms Buchwald's ruling would allow a government official's or employee's accounts to be considered official "simply when multiple tweets they send are deemed too closely related to their work."

Politicians from California to Florida have been sued for blocking users, and courts have mostly ruled against them.

Maryland Governor Larry Hogan agreed to implement a new social media policy to settle a suit brought by the American Civil Liberties Union on behalf of four residents who had claimed he censored them by deleting their comments and blocking them from his Facebook page.

In January, a federal appeals court in Richmond, Virginia, upheld a ruling finding that the chairwoman of the Loudon County Board of Supervisors had violated the First Amendment rights of a constituent by banning him from her Facebook page.

But Kentucky Governor Matt Bevin won an initial round when a federal judge denied a request for a preliminary court order barring him from blocking anyone on Twitter or Facebook.

Mr Trump offered his own argument in support of his Twitter use to reporters before boarding Marine One last week.