LUÍS EDUARDO, BRAZIL/BOONE, IOWA (REUTERS) - The Bella Vita luxury condominium tower rises 20 storeys over the boomtown of Luís Eduardo Magalhães in north-eastern Brazil. Its private movie theatre and helipad are symbols of how far this dusty farming community has come since it was founded just 18 years ago.

Local soybean producers shell out upwards of a half-million US dollars to live in the complex. Nearby farm equipment sellers, car dealerships and construction supply stores are bustling too.

"I'm not buying any machinery, I'm not spending any money," Mr Sheppard said.

A growing trade war between the United States and China is re-ordering the global grains business. In response to the Trump administration's tariffs on Chinese goods, Beijing this year imposed levies on US agricultural products. Among them was a 25 per cent tariff on soybeans, the single most valuable US farm export. US growers sold US$12 billion (S$16.6 billion) worth to China last year alone.

The fallout has been quick. China, the world's largest importer of soybeans, has scaled back purchases of US grain to feed its massive hog herd.

It is turning instead to Brazil, which has ridden the wave of Chinese demand for two decades to become a global agricultural powerhouse. Brazilian soybean exports to the Asian country jumped 22 per cent by value between January and September, compared to the same period a year ago.

Brazilian producers are not only selling more grain, but their soy is also fetching US$2.83 more per bushel than beans from the US, up from a premium of just US$0.60 a year ago, thanks to stepped up Chinese purchases.

Prices for US soybeans, meanwhile, recently sunk to decade lows that farmers say are below the cost of production.

The slump has made the agricultural sector a drag on an otherwise healthy US economy. The Trump administration said in July that it would spend up to US$12 billion in taxpayer funds to help US farmers offset trade-related losses, although the aid package could shrink.

Many American farmers, overwhelmingly conservative voters who helped propel Mr Donald Trump to the presidency, are standing by their man.

They believe he will eventually negotiate a better trade deal with China, whose appetite for soybeans is so vast that it cannot completely wean itself off US grain.

But for the time being, Trump trade policies are handing precious market share, money and momentum to Brazil, the US' most formidable agricultural competitor. Some fear the lost ground will be hard to reclaim.

"Bad news on tariffs in the US is good news for them," said Mr Robert Crain, general manager for the Americas for equipment dealer AGCO Corp, about Brazilian farmers in an interview at the Iowa show.

Like their US counterparts, Brazil's farmers produce much more grain than is needed at home. Foreign customers are responsible for the country's agricultural boom. Nearly 80 per cent of Brazil's soy exports now head to China.

The city of Luís Eduardo Magalhães is a testament to the importance of this international trade. Located in the state of Bahia, with farms stretching in every direction, the formerly unincorporated rural area in less than two decades has swelled to 85,000 people.

That is bigger than Sioux City, Iowa's fourth-largest city.

Major employers in Luís Eduardo, as most locals call the city, include fertiliser factories, seed producers and processors of soy and cotton. The area "relies 100 per cent on agriculture", said Mr Carminha Maria Missio, a farmer and president of the local growers union.

While Brazil's overall economy is stuck in a ditch, the nation's farm sector rolled to 13 per cent growth last year. The John Deere equipment dealership in Luís Eduardo saw its sales rise 15 per cent in 2017 and is expecting double-digit growth again this year, managing partner Chico Flores Oliveira said.

The local real estate market is surging too. Another new luxury condo tower is slated to open next year. Single-family homes are sprouting throughout the city. Prices for prime farmland are up 37 per cent since 2012, according to consultancy Informa Economics IEG FNP.

Brazil's total soy area is expected to expand to a record 36.28 million ha this season due to robust Chinese demand, according to a Reuters poll of analysts.

Farmers are also bullish on this month's presidential election in Brazil. Far-right candidate Jair Bolsonaro, who is leading in the polls, favours rolling back fines for farmers who deforest illegally or break other environmental laws.

Like Mr Trump, Mr Bolsonaro, is wary of China. But producers here trust him not to blow it on trade.

"We have access to him... and I am certain that he is smart and sensible."

The outlook is much gloomier in Iowa, the long-established heart of US agriculture.

It is the nation's top corn-producing state and the No. 2 producer of soybeans. But its access to some global markets has suffered under Mr Trump.

The President walked away from the Trans-Pacific Partnership, a trade agreement that would have opened valuable markets such as Japan to more American agricultural products.

His renegotiation of the Nafta accord had Mexico, the largest importer of US corn, exploring other suppliers, including Brazil. Now the Chinese are pulling back.

Boone lays smack in the state's centre, surrounded by miles of row crops, hogs and poultry. Farmland values here fell 12 per cent from 2012 to 2017, according to Iowa State University. 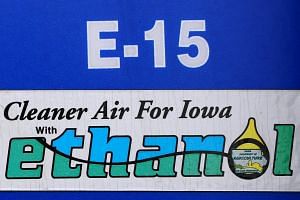 Worries about the US-China trade war loomed over the recent Farm Progress show, which comes to town every other year.

Equipment dealer Lee Randall jotted down prices at an auction of used tractors and implements at the show.

Prices have dropped on trade tensions and low crop prices, he said, shaking his head as a green and yellow Deere & Co combine sold for US$118,000 and another fetched US$82,000.

"Five years ago you could have added 30 per cent to every one of these pieces," said Mr Randall, whose business, Randall Brothers, is based in Ohio.

Nearby, Mr Brett Begemann, chief operating officer for Bayer Crop Science said farmers were likewise scrutinising purchases of seeds and chemicals. The trade dispute is making it difficult for Bayer to predict 2019 earnings for its agriculture unit.

A two-hour drive north of Boone, in Algona, Iowa, a town of about 5,500 people, farm doldrums are crimping business at the local Deere and Harley-Davidson dealerships, the operators said.

"Ultimately this area lives and dies by the farmer," said Mr Jim Wilcox, an owner of the Harley store.

Farmers' woes are showing up on bank balance sheets as well.

The proportion of the region's agricultural loans reported as having repayment problems was up in the second quarter, reaching mid-year levels not seen since 2002, according to the Federal Reserve Bank of Chicago.

Mr Rodney Jensen, who farms near Algona, regrets not making deals to sell soybeans from his autumn harvest when prices were higher. Like many, he is storing his crop, waiting for better times.

He worries China will not buy as much US soy as it used to, even if the two nations patch things up.

"It's been pretty pessimistic around here," Mr Jensen said.