WASHINGTON • President Donald Trump intends to offer an "aspirational" and "visionary" path forward for the nation in his State of the Union address on Tuesday, White House aides said, even as his relations with lawmakers have soured over his threats to use executive powers to bypass them.

In his third prime-time address to the nation from the House chambers, Mr Trump will call on Congress to work with him on new initiatives around infrastructure and healthcare, while also reaffirming his strategy to toughen immigration enforcement, confront China on trade and actively intervene in the political upheaval in Venezuela, aides said in previewing the speech on Friday.

Mr Trump will make an appeal for bipartisan support, the aides said, despite the heightened acrimony in the nation's capital as the White House engaged in a fierce stand-off with Democrats over the President's efforts to build a border wall.

The speech comes after Mr Trump began his third year in office last month during a partial government shutdown that ended only after he set a Feb 15 ultimatum to get his wall - with a threat to declare a national emergency if he is rebuffed.

"Together we can break decades of political stalemate," Mr Trump plans to say, according to an excerpt of his prepared remarks offered by a senior administration official who spoke on condition of anonymity. "We can bridge old divisions, heal old wounds, build new coalitions, forge new solutions and unlock the extraordinary promise of America's future. The decision is ours to make."

Earlier on Friday, Mr Trump was coy about his plans for a potential national emergency, which advisers have said could allow him to redirect some Pentagon funding to build the wall on the US-Mexico border.

"I don't want to say," Mr Trump said at a midday photo op, when asked about that possibility. "You'll hear the State of the Union, and let's see what happens." 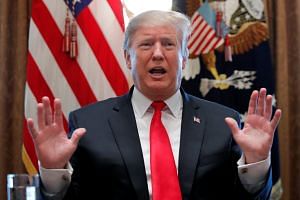 Trump plans appeal to Democrats in State of the Union speech, official says

Trump to deliver State of the Union address on Feb 5

The President intends to highlight his immigration agenda, the senior administration official said, but the speech is not intended as a sweeping jeremiad on that singular topic.

The aide described the address, in length and tone, as in line with traditional State of the Union speeches from Mr Trump.

Among the key points, the President intends to call on lawmakers to ratify the US-Mexico-Canada free trade agreement that his administration signed last year.

The President will also discuss his national security and foreign policy initiatives, including his "determination to bring an end to US foreign wars", the official said.

Mr Trump's speech had been scheduled for Jan 29, but House Speaker Nancy Pelosi, a California Democrat, called it off because the shutdown was under way, leading to an angry response from the President, who denied her and several other Democrats access to a military plane to visit US troops in Afghanistan.

Ms Stacey Abrams, the former minority leader of the Georgia House of Representatives who narrowly lost a gubernatorial race last autumn, is slated to deliver the Democratic rebuttal to Mr Trump.

A joint negotiating committee on Capitol Hill is trying to work out a new spending deal to keep the government open past Feb 15, when the three-week continuing resolution that ended the shutdown is set to expire.

Ms Pelosi has said there will be no money for a wall in any deal, and in an interview with The New York Times on Thursday, Mr Trump called the talks a "waste of time".

A version of this article appeared in the print edition of The Sunday Times on February 03, 2019, with the headline 'Trump to offer 'visionary' path for US in State of the Union address'. Subscribe
Topics:
More
Whatsapp Linkedin FB Messenger Telegram Reddit WeChat Pinterest Print Purchase Article Copy permalink