His tweet announcing the meeting was followed by another predicting North Korea would become "a great economic powerhouse", thanks to Mr Kim's leadership.

"My representatives have just left North Korea after a very productive meeting and an agreed-upon time and date for the second summit with Kim Jong Un," Mr Trump wrote on Friday night. "It will take place in Hanoi, Vietnam, on February 27 & 28. I look forward to seeing Chairman Kim & advancing the cause of peace!"

The upcoming meeting follows a historic summit in Singapore last June. In his State of the Union address last week, Mr Trump said that, while "much work remains to be done", he was hopeful his "good" relationship with the North Korean leader would yield results in ongoing nuclear talks.

"We continue our historic push for peace on the Korean Peninsula," Mr Trump said.

In the second tweet, Mr Trump predicted a promising future for Mr Kim and North Korea.

"North Korea, under the leadership of Kim Jong Un, will become a great economic powerhouse. He may surprise some but he won't surprise me, because I have gotten to know him & fully understand how capable he is. North Korea will become a different kind of rocket - an economic one!"

North Korea, under the leadership of Kim Jong Un, will become a great economic powerhouse. He may surprise some but he won't surprise me, because I have gotten to know him & fully understand how capable he is. North Korea will become a different kind of rocket - an economic one!

Before their first meeting, Mr Trump derided Mr Kim as "Little Rocket Man" with nuclear ambitions. The North Korean regime has long been regarded as one of the world's most repressive governments and responsible for widespread human-rights violations.

Meanwhile, Mr Trump's special envoy Stephen Biegun said yesterday that the United States has "some hard work" to do with North Korea before the second Trump-Kim summit.

Mr Trump is "very much looking forward to taking the next steps," according to a pool transcript of Mr Biegun's remarks.

The envoy had spent three days negotiating with officials in Pyongyang before his meeting with South Korean Foreign Minister Kang Kyung-wha in Seoul.

"I'm confident that, if both sides stay committed, we can make real progress here," Mr Biegun said. "We don't know where it's going to go but we are in the midst of a conversation with the North and our discussions were productive." 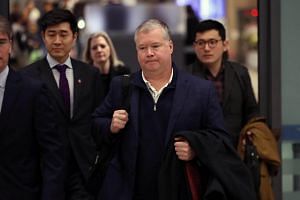 From Twitter hate to second date: Trump and Kim in quotes

Can the second Trump-Kim summit end the Korean War?

Choice of Vietnam as Trump-Kim summit venue shows possibility of moving beyond conflict: US State Department

Mr Trump will face pressure to achieve more during his upcoming next meeting with Mr Kim, after the first summit did not yield commitments from Mr Kim to allow weapons inspections or dismantle its growing arsenal of warheads and intercontinental ballistic missiles.

In recent months, North Korea has said it would consider a step-by-step approach, pairing actions to denuclearise with incentives, including the removal of economic sanctions crippling its economy.

In a New Year's address, Mr Kim threatened a "new path" if the US didn't ease "vicious" sanctions.

A US administration official said that Mr Kim preferred Hanoi over Danang, another Vietnamese city that was considered for the summit. The official, who was granted anonymity to discuss the preparations for the meeting, said Vietnamese officials considered their capital a more prestigious setting, and that Mr Trump did not particularly care either way.

Vietnam was considered a favourable location for the summit because Mr Kim could travel to the country with a flight largely over friendly Chinese territory.