WASHINGTON - US President Donald Trump will call on nations to identify common interests and together face shared threats in his address at the UN General Assembly (UNGA) in New York on Tuesday morning (Tuesday night Sept 19, Singapore time), a senior administration official said.

"The President has a foreign policy that has been described as principled realism - to take a clear-eyed look at the world, to take decisions based on outcomes, to act in the best rational interest of the United States, but to do so in a manner consistent with our values and our traditions," the official said.

In his address which will be the most closely watched at the UNGA, Mr Trump will also address threats of the day - the "rogue regimes that threaten world stability and peace as well as prosperity". These include North Korea and Iran, said the official.

The President will "appeal to other nations to do their part in confronting these threats and understanding that these are a shared menace and that nations cannot be bystanders to history and that if we don't confront the threats now they will only gather force and become more formidable.

"Together, nations have an obligation to engage in collaborative behaviour to confront these threats... because nations that care for their own citizens see a rational need to cooperate,'' he added.

The senior official told reporters that Mr Trump will speak in "extremely tough terms about the North Korean menace and the threat it poses to our security and the security of all the nations in that room".

Mr Trump's first appearance at the UNGA comes as North Korea steams ahead with its nuclear missile programme and Russia conducts massive military exercises on its border with Nato.

Russian President Vladimir Putin will not be attending the UNGA. Neither will China's President Xi Jinping. 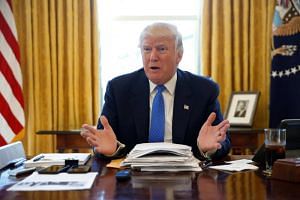 "In essence here what the President is doing, is explaining how the principle of 'America First' is not only consistent with the goal of international cooperation, but a rational basis for every country to engage in cooperation," the official told journalists. 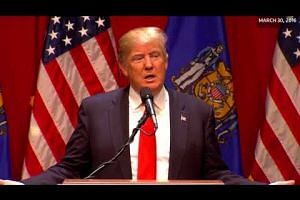 US President Donald Trump calls for bold reforms in the UN

Mr Trump will "appeal to each nation to use sovereignty as the basis for mutual cooperation, the idea being rather than adhering to a top down model of global bureaucracy, it's a model that's from the nation state up, from the people up," the official said.

"Nation states that serve the interests of their citizens have a rational interest in cooperating to confront shared dangers, shared threats, as well as shared opportunities," he added.

Mr Trump's speech will reprise the themes of earlier major speeches in Saudi Arabia on May 21, and a speech in Poland on July 6. It will also resonate with his campaign speeches in 2016 where he spoke about an America not interested in nation building or creating democracies through military force, but interested in creating stability, through countries that are "more secure, more prosperous, more sovereign", the official said.

In Saudi Arabia, the US leader had spoken of burden-sharing in the fight against terrorism, and in Poland, he spoke of terrorism as an enemy of all humanity and the need for greater burden-sharing in the fight against it. In Poland, he also spoke of "summoning the will to protect our civilisation and the values that we cherish and that make us unique, that make us who we are," the official said.

The speech in New York "represents the President's vision and declaration to the countries of the world about how America sees the world, how America operates, what its values are and how it relates to other countries", the official said

"It is a deeply philosophical address and also discusses very specific challenges from world regime and non-state actors around the world today," he added.