In a series of tweets, the president linked the tariffs - which sparked a fierce global response last week following their surprise announcement - to issues with neighbouring Canada and Mexico.

"Tariffs on Steel and Aluminum will only come off if new & fair NAFTA agreement is signed," he said, lamenting the US's "large trade deficits".

Trump repeated his belief that Nafta has been a "bad deal" that has taken jobs and companies out of the US.

His administration has previously called on Canada to abolish its supply-managed dairy and poultry sectors, and the president reiterated his criticism on Monday, branding Canada "highly restrictive".

"Canada must.. treat our farmers much better", he said.

Meanwhile, in a reference to the US opioid crisis, Trump said Mexico must "do much more" to stem the flow of illegal drugs into the US. 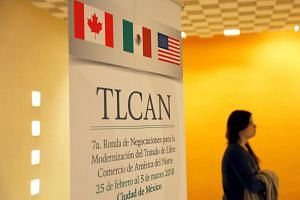 Trump ratchets up pressure on Canada, Mexico over trade

"They have not done what needs to be done," he said. "Millions of people addicted and dying."

Efforts to renegotiate Nafta are ongoing, with a seventh round of talks scheduled to wrap up Monday.