Mr McGahn would “respect the President’s instruction” and not testify, his lawyer said later, in a letter sent to the head of the House of Representatives Judiciary Committee.

The committee is investigating whether Mr Trump illegally obstructed the probe into Russian interference in the 2016 presidential election. It wants to quiz Mr McGahn after he figured prominently in a report by Special Counsel Robert Mueller about the Russia probe and whether Mr Trump committed obstruction of justice.

But in a letter to the committee, White House Counsel Pat Cipollone said Mr McGahn should not appear due to both “constitutional immunity” and “in order to protect the prerogatives of the Office of the Presidency”.

The committee’s Democratic chairman, Mr Jerrold Nadler, responded by saying Mr Trump was trying to block damaging testimony about his obstruction of justice.

“The President acted again and again – perhaps criminally - to protect himself from federal law enforcement. Don McGahn personally witnessed the most egregious of these acts.

"President Trump knows this. He clearly does not want the American people to hear first-hand about his alleged misconduct,” Mr Nadler said in a statement.  He said his committee would meet on Tuesday morning and expected Mr McGahn to show up and testify.

Another Democrat on the committee, Mr David Cicilline, warned that if Mr McGahn stays away on Tuesday, lawmakers might need to push ahead with an impeachment inquiry against Mr Trump in order to compel his administration to produce witnesses and documents. 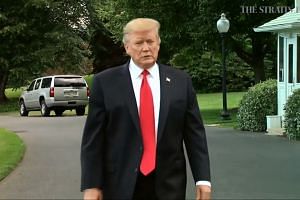 Trump sues to block US Congress subpoena for his financial records

“There are a number of colleagues who have suggested that if Mr McGahn doesn’t appear tomorrow and answer questions that it’s an appropriate time to open an impeachment inquiry,” Mr Cicilline told reporters. He said an inquiry would begin the process to determine whether or not articles of impeachment should be voted on.

In his report, Mr Mueller cited Mr McGahn as saying that Mr Trump called him several times in June 2017 to tell him to direct the Justice Department to remove Mr Mueller because of conflicts of interest.

Mr McGahn did not carry out Mr Trump’s order. Later, when news articles about the incident surfaced, Mr McGahn told Mr Mueller’s investigators that Mr Trump tried to get him to dispute the accuracy of the reports. Mr McGahn again refused.

Many Democratic lawmakers, as well as many former prosecutors not involved in the investigation, have said the alleged order by the President to fire Mr Mueller and attempt to coerce Mr McGahn to lie about it could amount to committing the crime of obstruction.

Mr Trump has denied any wrongdoing and said he did not ask Mr McGahn to have Mr Mueller removed.

Mr Mueller's report described numerous links between Mr Trump's 2016 campaign and various Russians but did not find sufficient evidence to establish there was a criminal conspiracy with Moscow.

Mr Mueller also described numerous attempts by Mr Trump to impede the investigation, but stopped short of declaring the President had committed a crime.

Attorney-General William Barr determined after reviewing Mr Mueller's findings that there was insufficient evidence to bring criminal obstruction charges against the President.

Mr Nadler's committee has been locked in multiple battles with the Trump administration over access to information contained in the Mueller report.

Mr Trump said following the release of the report in March that it showed he was exonerated of colluding with Russia and obstruction justice.

But since then he has hardened his administration's position of defying the legal demands of Democrats in Congress who want more information on the Russia investigation and Mr Trump's taxes and business dealings.

Earlier this month, the committee voted to hold Mr Barr in contempt after he defied a subpoena seeking an unredacted copy of the Mueller report and its underlying investigative materials.

Mr Nadler also issued a subpoena last month compelling Mr McGahn to testify on Tuesday, and he previously said he would hold the attorney in contempt if he did not show up.

The Justice Department's Office of Legal Counsel issued an opinion on Monday that gave legal cover to the decision to block Mr McGahn from testifying.