But he insists levy on Chinese goods has not impacted American consumers so far; retailers welcome reprieve

US President Donald Trump, pilloried for being the Grinch who stole Christmas over concerns that his China tariffs would raise the prices of festive gifts, said he had delayed tariffs to spare the holiday shopping season.

"We are doing this for the Christmas season, just in case some of the tariffs would have an impact on US customers, but so far they have had virtually none," Mr Trump told reporters on Tuesday.

"But just in case they might have an impact on people, what we have done is we have delayed it, so that they won't be relevant to the Christmas shopping season," he added.

Hours before, the Office of the US Trade Representative (USTR) announced that a 10 per cent tariff hike on US$300 billion (S$416 billion) worth of Chinese imports, set to take effect next month, would be delayed to Dec 15 for certain China-made goods. The exemptions include popular Christmas gifts such as cellphones, laptop computers, video game consoles, toys, computer monitors, shoes and clothes.

The 21-page list released by the USTR also included a host of items, from greeting cards to pet toys and hair dryers.

Company executives had testified for seven days in Washington in June, making the case that the tariffs would hurt their businesses and force them to fire workers, raise prices or even close down.

Other products would be exempted from the tariffs entirely because of "health, safety, national security and other factors", the USTR said in a statement.

Analysts said the tariff delay gave a reprieve to retailers, and offered American and Chinese officials some breathing room to get trade negotiations back on track.

The stock market welcomed the news, with the Dow Jones Industrial Average surging to close up 1.42 per cent on Tuesday.

It is some relief, but this is not a peace settlement. It is an olive branch to President Xi Jinping to see if he will respond in kind. We will see what happens.

During this delay period, we urge the administration to develop an effective strategy to address China's unfair trade practices by working with our allies instead of using unilateral tariffs that cost American jobs and hurt consumers.

Peterson Institute for International Economics senior fellow Gary Hufbauer told The Straits Times that the delay would enable retailers to stock up on the exempted items for the Christmas season.

"It is some relief, but this is not a peace settlement. It is an olive branch to President Xi Jinping to see if he will respond in kind. We will see what happens," he said.

Tariffs Hurt the Heartland, a national campaign against tariffs, welcomed the delay, and said that it was an acknowledgement by the Trump administration that tariffs are taxes paid by Americans.

"It appears the administration understands that taxes on everyday products such as toys, clothes and electronics would be politically unpopular and hurt those who can least afford it," it said in a statement.

National Retail Federation president David French also welcomed the delay, but warned that uncertainty continued for US businesses. Some tariffs will also go ahead on Sept 1, and will lead to higher costs for American families and slow the US economy, he added.

"During this delay period, we urge the administration to develop an effective strategy to address China's unfair trade practices by working with our allies instead of using unilateral tariffs that cost American jobs and hurt consumers," he said in a statement. 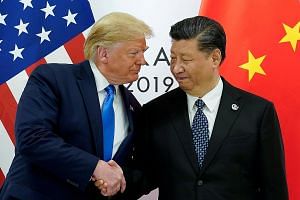 Mr Trump continues to insist that China is footing the bill for the tariffs, despite hundreds of trade groups and companies warning that American consumers and businesses are paying for what is essentially a tax on imports from China. But the tariff delay represents a backpedalling from an earlier hardline approach, following American companies' pleas for tariff relief.

"The administration wants the delay to be seen as a course correction, an olive branch, them trying to make a deal, but not a reversal and caving to China. They can't stand that politically," said Dr Hufbauer. "It is obviously a concession and there could be others going forward, but I don't think there will be a big one."

Still, the tariff delay at least meant that trade talks scheduled to take place in Washington next month - which Mr Trump had said might not happen as recently as last week - were back on track.

The tariff delay, said Dr Hufbauer, "might get a little more concessions" from China in the September meeting, possibly on Chinese purchases of agriculture products. After meeting Mr Xi at the Group of 20 Summit in Osaka in June, Mr Trump said the Chinese had committed to large purchases of farm products, but Beijing later said they never agreed to do so.

Dr Hufbauer said: "I think it will be a little truce, not a big settlement, that would make the stock market happy. But it won't be a big party. As they say, stop pounding me with a hammer."