NEW YORK (NYTIMES, REUTERS) - US President-elect Donald Trump has retreated from some of his most extreme campaign promises in an interview, pledging to have an open mind on climate change, dropping his vow to jail Mrs Hillary Clinton and expressing doubt about the value of torturing terrorism suspects.

In an hour-long, wide-ranging interview with the New York Times, Mr Trump disavowed the alt-right movement, saying he did not do anything to energise the movement. He was also fiercely unapologetic about repeatedly flouting the traditional ethical and political conventions that have long shaped the American presidency.

The interview demonstrated Mr Trump's apparent eagerness to please his audience and his tendency to speak in generalities, even as he was pressed to elaborate on policy positions that propelled him to a convincing and surprising victory over Mrs Clinton two weeks ago.

Here are excerpts of what Mr Trump said in the interview:

1. KEEPING OPEN MIND ON CLIMATE ACCORD

Tom Friedman asks if Trump will withdraw from climate change accords. Trump: “I’m looking at it very closely. I have an open mind to it."

Mr Trump refused to repeat his promise to abandon the international climate accord reached last year in Paris. Instead he said: "I have an open mind to it."

He admitted that there was "some connectivity" between human activity and global warming, despite previously describing climate change as a hoax. He also said he was thinking about climate change and American competitiveness and "how much it will cost our companies".

Two people advising Mr Trump's transition team on energy and environment issues said they were caught off guard by his remarks.

Trump is pressed if he has definitively ruled out prosecuting Hillary Clinton. “It’s just not something that I feel very strongly about."

Mr Trump expressed empathy towards his former rival. He said he has no interest in pressing for Mrs Clinton's prosecution over her use of a private e-mail server when she was secretary of state, or for financial acts committed by the Clinton Foundation.

"I want to move forward," he said. "I don't want to move back. I don't want to hurt the Clintons, I really don't. She went through a lot and suffered greatly in many different ways." He added: "I think it would be very very divisive for the country."

During campaign rallies, Mr Trump often fired up his supporters by calling for investigations of Mrs Clinton, spurring chants of "Lock her up!" by the crowd.

Trump says he is "seriously considering" Mattis for DoD, says he asked Mattis about waterboarding, was surprised he didn't favor it.

The President-elect changed his mind on the need for torture as a tool in the fight against terrorism, which he repeatedly endorsed during the campaign. His turnabout on the usefulness of waterboarding and other forms of torture came after talking with General James N. Mattis, a retired Marine Corps general who headed the US Central Command.

"He said, 'I've never found it to be useful'," Mr Trump said, describing the general's view of torturing terrorism suspects. He said Gen Mattis found more value in building trust and rewarding cooperation with terror suspects: "'Give me a pack of cigarettes and a couple of beers and I'll do better.' I was very impressed by that answer," Mr Trump said.

He added that torture is "not going to make the kind of a difference that a lot of people are thinking".

Will the President-elect condemn Richard Spencer’s alt-right gathering? “I condemn them. I disavow, and I condemn,” says Trump.

He condemned an alt-right conference in Washington over the weekend where some members performed a Hitler salute and yelled: "Hail Trump!" after a speech about white nationalism.

"I condemn them. I disavow, and I condemn," he said. "It's not a group I want to energise. And if they are energised I want to look into it and find out why."

He also rejected charges by some critics that his chief White House strategist Stephen Bannon is a racist.

"I've known Steve Bannon a long time. If I thought he was a racist, or alt-right... I wouldn't even think about hiring him."

Critics say Mr Bannon, a former head of the conservative Breitbart News, had made the website a forum for the alt-right, a loose grouping that rejects mainstream politics and includes neo-Nazis, white supremacists and anti-Semites.

5. A PRESIDENT CAN'T HAVE CONFLICTS OF INTEREST

Trump says "in theory" he could continue signing checks at his company, but he is "phasing that out now" and giving to his kids. 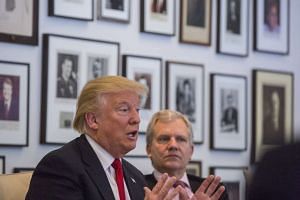 CNN reported that his comment was reminiscent of former US president Richard Nixon's remark to journalist David Frost that by definition, a president's actions don't violate the law. "Well, when the president does it, that means it is not illegal," Mr Nixon said.

Mr Trump said it would be extremely difficult to sell off his businesses because they are real estate holdings. But he would "like to do something" to address ethics concerns, and he said he had turned over the management of the businesses to his children.

Mr Trump, however, insisted that he could still have business partners into the White House for grip-and-grin photographs. He said that critics were pressuring him to go beyond what he was willing to do, including distancing himself from his children while they run his businesses.

"If it were up to some people," he said, "I would never, ever see my daughter Ivanka again."

6. HE CAN MAKE PEACE WITH ISRAELIS , PALESTINIANS

Trump would 'love' to broker peace between Palestinians, Israel

Mr Trump rejected the idea that he was bound by federal anti-nepotism laws against appointing his son-in-law, Mr Jared Kushner, to a White House job. But he said he would want to avoid the appearance of a conflict, and might instead seek to make him a special envoy charged with brokering peace in the Middle East.

"The President of the United States is allowed to have whatever conflicts he or she wants, but I don't want to do that," he said.

But he pointed out that Mr Kushner, who is an observant Jew, "could be very helpful" in reconciling the longstanding dispute between the Israelis and the Palestinians.

"I would love to be able to be the one that made peace with Israel and the Palestinians," he said. "A lot of people tell me, really great people tell me that it's impossible - you can't do it," he said. "I disagree; I think you can make peace... I have reason to believe I can do it."

On Syria, he said “we have to end that craziness that’s going on in Syria,” and he has some "strong ideas" about how to deal with the civil war, but he declined to elaborate.

He also said the United States should not “be a nation builder”, repeating his line from the campaign that fighting the war in Iraq was “one of the great mistakes in the history of our country”.